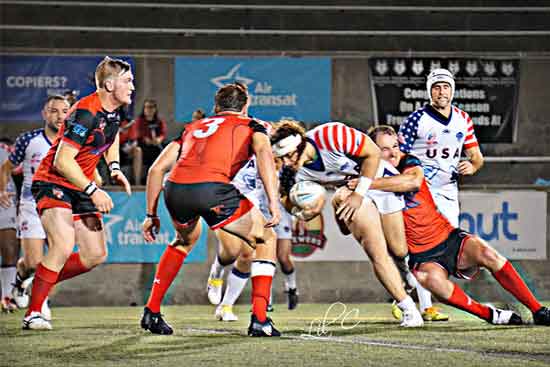 With their summer schedule of domestic Tests now behind them and with their coaching staff having wrapped up their respective commitments in different parts of the world, the USA Hawks are focusing on the one thing that has been in the back of their minds for the last two years – the Rugby League World Cup (RLWC).

The Americans qualified for the game’s international showpiece in December 2015 when they beat Canada and Jamaica to clinch the RLWC Americas region berth.

They’ve been slotted into Pool D alongside Fiji and Italy and their crossover Pool game will be against co-hosts Papua New Guinea (Pool C).

As is the case with so many Tier 2 countries, players penciled in for the national squad are left to their own devices for long periods of time during the offseason, and in the case of American-based guys, that has a lot to do with the tyranny of distance issue. It’s a big country and they don’t all live in the same part of it.

Another issue they have to deal with is that head coach Brian McDermott is domiciled in the UK where he coaches the Super League champions Leeds Rhinos. One of his assistants, Mark Gliddon, is in Australia where he coaches an Intrust Super Cup side, leaving the other assistant coach Sean Rutgerson to relay Mac’s coaching instructions from his base in Florida.

In an effort to deal with these obstacles, Rutgerson designed a USA Hawks accountability Facebook page where he laid out strength and conditioning programs for players to follow to accelerate their rugby league readiness and fitness.

One of those players on the national squad is Josh Rice. These days he plays for the New York Knights in the USA Rugby League (USARL) competition. Prior to that, he lived in Hawaii where he first started playing rugby league.

He made his debut for the US national team in 2011 when he featured in the Colonial Cup series against Canada.

He says Rutgerson’s social media tool has been pretty useful.

“Besides my training with the Knights, I get in the gym every week and also do things like yoga or pilates when I can,” he said.

“Sean Rutgerson has been sending out workouts and fitness tests for us to complete each week to keep everyone strong and fit leading up to the World Cup. Also, I’m eating lots of vegetables!”

By the time they play their opening game at RLWC 2017 against Fiji, it will have been about five weeks since the players had their last hitout, which was against Canada in the Americas Championship/Colonial Cup.

But Rice says that doesn’t mean the lines of communication haven’t been working overtime since then.

“Brian McDermott has sent out some guidelines and expectations that he has for guys in the player pool.

“Down in Jacksonville, coach Rutgerson spoke about these expectations and we have been working on these things building up to the World Cup.”

Rice says he set himself some personal goals at the start of the year and so far, so good.

“Well, my first goal was to make the RLWC team. It’s all gravy after that!”

The USA Hawks squad is due to arrive in Australia about a week before their first game.