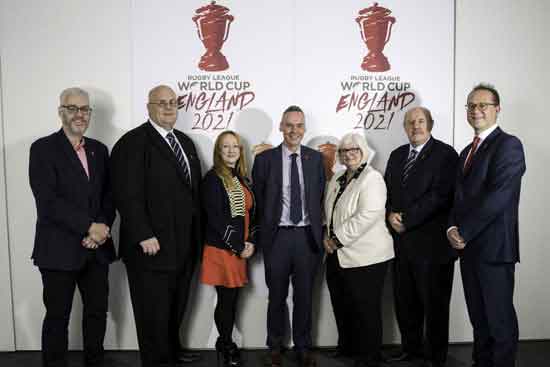 The Board of the Rugby League World Cup 2021 met for the first time last week in MediaCityUK, Salford, discussing a number of important topics including the ongoing process for selection of the venues for the Men’s, Women’s and Wheelchair World Cup.

The Board heard that the process for the selection of host venues is progressing well, with over thirty towns and cities across the country already expressing an interest in being part of the tournament.

Chaired by Rugby Football League and Super League Chief Executive Nigel Wood, the Rugby League World Cup 2021 Board will compromise of nine individuals, with a range of different skills and backgrounds.

Following an extensive recruitment process, led by the new Rugby League World Cup Chief Executive Jon Dutton, three Non-Executive Directors have been appointed to sit on the Board. Stacey Knight, Stuart Cain and Mike Perls all have extensive experience across digital marketing, customer experience and commerce.

Stacey Knight is the founder of Blue, a creative, innovation and strategy division of global media owner JCDecaux. Stuart Cain is currently Commercial Director at Wasps Holding Limited and is responsible for revenues for Wasps Rugby Club and the Ricoh Arena whilst Mike Perls is founder and CEO of MC2, a strategic communications agency based in Manchester and San Francisco.

Joining the Non-Executive Directors at the inaugural Board meeting were Brian Barwick, Chairman of the Rugby Football League, Andrew Honeyman, Head of Sport at the Department for Digital, Culture, Media and Sport, Jane Allan, Chief Executive of British Gymnastics and Jon Dutton, the incoming Chief Executive of the Rugby League World Cup 2021.

Nigel Wood, Chairman of the Rugby League World Cup 2021, said: “I am delighted to have an experienced and dynamic group of individuals on the Board for the 2021 World Cup.

“The first meeting was full of enthusiasm and it was very clear that there is a strong determination amongst the group that the 2021 Rugby League World Cup will be the most ambitious and successful in the sports history.

“The breadth of experience that each of the individuals brings will undoubtedly provide the Executive tasked with delivering this event the support, scrutiny and guidance they will need in the coming years.”

Board of the Rugby League World Cup 2021

Andrew Honeyman, representing DCMS
Andrew Honeyman has been Head of Sport at the Department for Digital, Culture, Media and Sport since May 2017.

Jane Allan, representing UK Sport
Jane is CEO of British Gymnastics. She commenced her Sports Administration career over 33 years ago in Australia and worked in several sports including softball, athletics, rowing and gymnastics.

Mike Perls, Non- Executive Director
Mike Perls is founder and CEO of MC2, the strategic communications agency based in Manchester and San Francisco dealing with brands around the world.