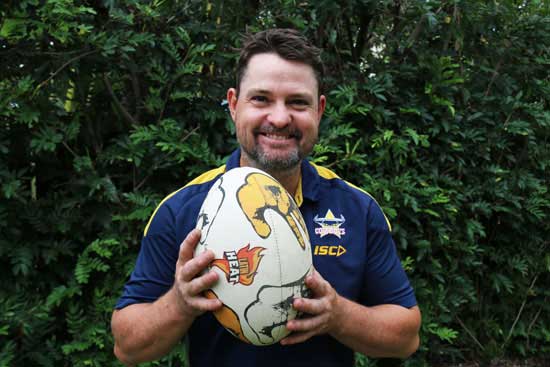 A mad Cowboys fan has taken time out from the build-up to the NRL grand final to help the earthquake-ravaged Mexican Rugby League team get noticed around the world.

Norman Park’s Mick Mitchell, a gas and plumbing specialist and former rugby league player himself, has stepped in to give a helping hand to the nation which lost more than 300 people to last week’s devastating quake.

The Mexican Rugby League side was already doing it tough to raise funds to participate in their first-ever Latin American Rugby league Championships in Chile before Mother Nature struck.

The natural disaster has further hampered efforts, with their countrymen understandably diverting funds towards more pressing matters as the nation rebuilds.

On top of flights, the volunteer-run championships has been struggling to organise $4000 to livestream the two-day championships around the world on November 16-17.

Which is where league enthusiast Mitchell and his company IntaGas Services stepped in.

“We’ve put the first $1000 down towards broadcasting the Latin American Championships and now I just need three more businesses to do the same,” said Mitchell, originally from Innisfail.

“I got interested via an old footy mate, who is helping to organise the event, and I know this has been something that has been years in the making for them.

“Imagine if, against all odds, this Mexico team recovers from the earthquake, scrapes together the funds to get there, but then nobody in the wider rugby league world gets to see them create history.

“To me, having the sport I love grow to these other countries is hugely exciting, especially when they don’t have many resources, so I’m just doing what I can to chip in.”

Aside from Mexico, the other teams competing in November’s historic Latin American Championships will be Argentina, Colombia and host Chile.

All the teams, aside from Chile, will earn a ranking from the Rugby League International Federation for the first time.

Mexico Rugby League has held a regular domestic rugby league competition since 2013, but due to a lack of funding and opposition, has never played an international game before.

The not-for-profit body helping to organise the Latin American Championships, Latin Heat Rugby League, was partly founded by one of Mitchell’s former teammates at the Wests Mitchelton Panthers, Robert Burgin.

“I would describe Latin Heat as a bunch of rugby league nerds basically; people who are passionate about seeing the game grow in places where it can do some good for communities,” Burgin said.

“The Latin American Championships is the culmination of close to five years’ work and it would be a shame to get so close and not quite fulfil the complete picture.

“Getting the Mexican team to Chile and finding sponsors to have their logo on the livestream broadcast of the championships are our biggest hurdles.

“I’m incredibly thankful to Mick Mitchell and IntaGas Services for jumping on board and helping out, and hopeful this might spur others to rally behind these nations which are new to the sport.”

Sponsors of the livestream can get their company logo shown over the two days of the Latin American Championships for $1000 on high rotation or $500 for moderate rotation.

For further information contact Robert Burgin at Play@LatinHeatrl.com or 0448 410 364.

Those wanting to contribute towards flights for Mexican players – and go in the draw for a rare Johnathan Thurston jersey – can do so via the following link: www.chuffed.org/project/latino-rugby-league-championship