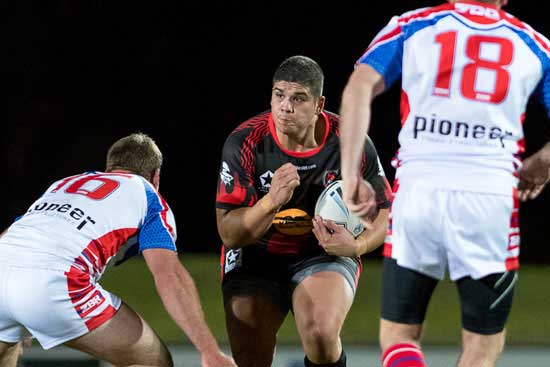 A 130kg prop who can play winger; a former nursing student turned chiropractic science hopeful; a rugby league international who didn’t play contact sport until he was 21.

Chilean juggernaut Daniel Aguirre Acevedo is like no other player before him.

As he prepares for the September 30 Rugby League International Federation sanctioned match against Thailand at Liverpool in western Sydney, the softly-spoken giant revealed an astonishing background.

While Aguirre Acevedo is not assured a place in a Chilean squad where selection remains highly competitive, his 193cm, 130kg frame would be a handy asset you’d imagine.

If you think his physical measurements limit him to playing up front in the forwards however, you’d be highly surprised.

“Most of this season I’ve been playing club rugby union on the wing,” he says.

“I kick quite a bit and I’ve got a little bit of pace for a big guy, so I’ve actually become quite used to it.”

While the thought of his hulking frame heading towards more slender outside backs makes you want to wince, it’s not without complete surprise.

At this year’s Cabramatta International Nines, Aguirre Acevedo showed several stunning turns of pace for the combined Latin American side, including a chip-chase try in the quarter-final.

That came after he impressed head coach and former Australian international Aaron Raper while playing for the GYG Latin Heat against a combined Canadian and USA team in September 2016.

He was also voted the Player of the Tournament at the 2016 Latino Nines, as Chile defended their title.

The surprising fact is that Aguirre Acevedo never played rugby league as a child, only soccer and touch football.

“I guess like a lot of the other boys in the Chilean team, my family was displaced because of the civil war in the early 80s,” Daniel explains.

“My grandfather was part of the revolution and he sent my Dad from Chile to France when he was just 16 for his own protection.

“Then I believe my father had a trip to Australia to play football, which is where he met my mother, who is also Chilean.”

Daniel has grown up bilingual, despite being raised mostly on the New South Wales Central Coast.

But already he feels as though being a part of Chilean Rugby League has helped him become more in touch with his roots.

“I had never thought of Chile having enough players for a rugby league team a few years back, but now there are guys popping up that we didn’t even know about,” says Aguirre Acevedo.

“There are more than 50 players in Australia we’ve discovered and obviously the domestic competition over there has really taken off in the past year.

“It’s strange how I kind of got involved…my younger cousin Miguel told me about it and he’s played rugby league for a long time since he was little, while I’m the older one but less experienced in a way.”

Daniel’s cousin, Miguel Acevedo Moreno, is another in the mix to be picked for Chile when the Weichafes’ team is announced on Friday.

Only just turned 18, he has already played first grade for Woy Woy on the Central Coast and was a previous Harmony Cup merit squad selection.

The cousins have never played alongside each other in a full Test match for Chile, only in the nine-a-side format.

While achieving that feat would tick one more accomplishment off Daniel’s list, he continues to set his ambitions for the future high in all aspects of life.

“I’ve got one more year in my chiropractic science bachelor’s degree at Macquarie University and then I’ve got my master’s degree,” he says.

“Within my immediate family I’ll be the first to get a university degree and that’s a goal I set myself that means a lot.

“I first started out doing nursing, but decided in the end that wasn’t what I wanted to do.

“I actually feel really good about where I’m heading with things, because it definitely hasn’t come easy.”

Not as easy as, say, floating between the front row and the wing anyway.

The Rise of The Underdogs on September 30 at Liverpool All Saints, Hillier Oval, Liverpool, features a full day of international matches from 1pm, with Malta Under 16 playing Africa United Under 16, Latin Heat Development facing ASEAN (South East Asia) at 3pm, Chile playing Thailand at 5.15pm, with the El Salvador v Uruguay showpiece at 7.30pm. Tickets are $10 an individual or $15 for two adults and children.