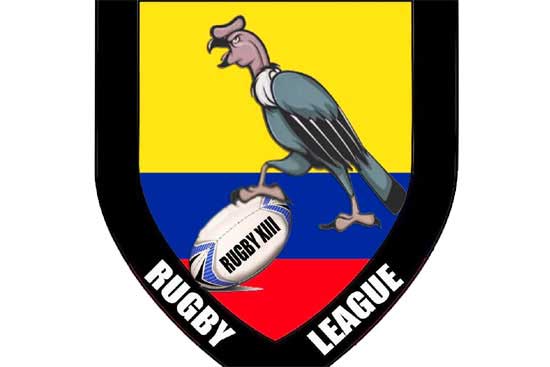 Colombia (like various other International Rugby League teams) began in Australia thanks largely to the Latin Heat. When co-founder Robert Burgin sent out promotional material for a Latin American Rugby League team in 2013, he came into contact with an NRL development officer named Daniel Sarmiento. Daniel (born in Bogota, Colombia) decided to help Rob out and the two joined forces. After organising their first training session in Brisbane, the first three players of the Latin Heat were all (coincidentally) from Bogota, Colombia, which included Daniel himself, Diego Lopez Pinto and Fernando Villegas. Diego was discovered while working as a security guard at a clothing store in Brisbane’s Queen Street Mall, while Fernando answered to an article in a newspaper. All three were strangers before the first training session. Latin Heat’s first international match against the Philippines in February 2014 included 6 Colombians in the 17 player squad.

For the next 2 years, numerous Colombian players starred for the Latin Heat against teams such as Thailand, Portugal, Greece and Japan. It wasn’t until 2015 that Colombia created a stand-alone team for the inaugural 2015 Latino Rugby League 7s tournament at New Era Stadium at Cabramatta in Sydney. Colombia lost their opening match against Ecuador 18-0 and then suffered a 12-4 loss to Peru. They played again in the Inaugural 2016 Copa Del Norte (Cup of the North) against Ecuador where they lost 24-18 via aggregate in a two game, 7-a-side match at Henson Park, Newtown. They also appeared at the 2016 Latino 9s Tournament at Hammondville Oval in Moorebank, Sydney, bowing out in the quarter finals to eventual champions Chile after a much-improved performance that saw them beat Ecuador 26-0.

The main players who have been involved with the Colombian and Latin Heat teams include;

Sebastian Maya: Previous captain of the Colombian Rugby League Australian team and former Rugby player from Medellin, Colombia. Sebastian suffered a career-ending ankle injury this year but has remained involved behind the scenes

Juan David: Regular Player of both Colombia and Latin Heat from Jerico in Colombia. A childhood teammate of Sebastian Maya from their time in Colombia. He has been pivotal in helping Colombia organise for the Latin American Championships in Chile.

Diego Santiago Gil Vejarano: Colombian, Queensland Sapo (Latin Heat representative team) and Latin Heat player from Bogota, Colombia. One of the most improved players in the history of Latin Heat.

Sebastian Martinez: Arrived in Australia from Bogota while in primary school. Played representative rugby league for Wide Bay alongside Patrick Kaufusi and has played competitively in Bundaberg, the Sunshine Coast and Brisbane. Gives the team an experienced edge and guidance in training and strategy.

Domestic Efforts in the Motherland.

Like most Rugby League international heritage teams, their main aim is to help promote the sport and begin it in their country back home.

Inaugural Latin Heat player Daniel Sarmiento, travelled to Colombia for four months in 2014 and conducted a coaching clinic while visiting family. A year later, fellow original Latin Heat player Fernando Villegas returned back to Bogota permanently and attempted to run various training sessions, however he too could not get regular activity occurring.

It wasn’t until late 2016 that both Colombian players (Juan and Sebastian) went back to Colombia to visit not only family and friends, but helped donate Rugby League kits, balls and equipment for locals in cities like Medellin and Bogota.

Hard Work begins to pay off: Both at home and Aboard

Former Latin Heat and Colombia player Nicolas Perico Daza helped begin the sport being played regularly in Colombia. Originally from Bogota, Nicolas lived in Brisbane, Australia, trained and learnt the game of Rugby League while living there. He represented Colombia at the 2016 Latino 9s and was a standout for the team. He moved back to Bogota, however his passion for the sport didn’t disappear.

When the Latin American Rugby League Championships were announced in Chile for November 2017, Nicolas (along with help from Australian based player Juan) helped run coaching clinics for local Colombian players in the Capital Bogota in preparation for the tournament.

Although players from both Australia and Colombia are passionate to represent the Tri Coloured nation, a small ex-pat Colombian Community in Antofagasta in Northern Chile have started to learn the game too. Guillermo Artiaga, (the main individual behind the sport in Chile) moved to Antofagasta for work. In collaboration with Colectividad De Colombianos Residentes En Antofagasta, Futbol A 13 Chile Rugby League and Colombia Rugby XIII, Guillermo helped encourage all three organisations to work together and help Colombia identify more Rugby League players for their national team and bring Rugby League to the city.

The local Chilean news station ran a piece on the collaboration.

Colombia now have their sights set firmly on the Latin American Rugby League Championships in November. The tournament will involve the national teams of Colombia, Chile, Mexico and Argentina and will occur in Los Angeles, Chile over two days, the 17-18th of November.

All squads will be permitted to name 20 players for the two-day event, but only 17 players can be used for any individual game.

The draw is as follows;

This is going to be an outstanding, ground-breaking event in many ways. If you would like to contribute in some small way, particularly to the substantial travel costs faced by Mexico, please visit: https://www.chuffed.org/project/latino-rugby-league-championship