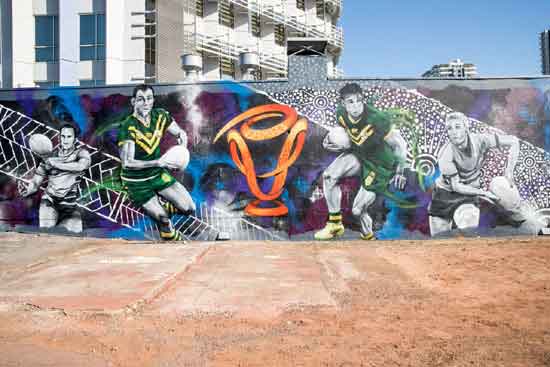 Kangaroos coach Mal Meninga has praised a giant mural unveiled in Darwin yesterday of Australian stars Cameron Smith, Will Chambers and Allana Ferguson for highlighting the diversity within rugby league.

The 40 metre Rugby League World Cup Street Mural of Smith, the Kangaroos captain, Chambers, a Nhulunbuy junior, and Ferguson, who plays for the Jillaroos, was commissioned by the Northern Territory Government to celebrate the first international to be played in the Top End.

Through the support of the Northern Territory Government, Darwin will host a Rugby League World Cup 2017 (RLWC2017) quarter-final on Friday, 17 November and visitors to the city for the match will be greeted by the mural on the corner of Bennett and Cavanagh Streets in the CBD.

A collaboration led by well-known Darwin artist David Collins and Jesse Bell, featuring designs by Shaun Lee and East Arnhem Land’s Gayili Marika Yunupingu, the mural will be in place until after the RLWC2017.

“It is great, the artists did a fantastic job,” Meninga said after joining NT Minister for Tourism and Culture Lauren Moss, RLWC2017 CEO Andrew Hill and the artists involved to officially launch the RLWC2017 Mural in Darwin.

“Will, being a Territorian, would obviously be thrilled at having his caricature up on the wall but there is also Allana and for me it shows the diversity of the game – more than just the elite level with Cameron and Will.”

The mural also features local junior and senior players and a wheelchair player.

“It is not just Cameron Smith or Will Chambers, it is everyone who can be involved in our game,” Meninga said.

The Australian coach also attended the NT NRL’s Frank Johnson Medal awards night on Monday and said he was looking forward to returning to Darwin with the Kangaroos during the World Cup.

“It is the first time that an international rugby league team has come to Darwin in 109 years and I know the team will be looking forward to it,” Meninga said.

“We have got a tough game initially in Melbourne, where we take on the English, who are ranked third in the world, so they will want to kick off their World Cup preparation in the best light. But we are out to win it and we will want to win every game, including this game.”

The RLWC2017 will be contested from 27 October to 2 December and features 14 nations playing 28 matches in 13 cities across Australia, New Zealand and in PNG.