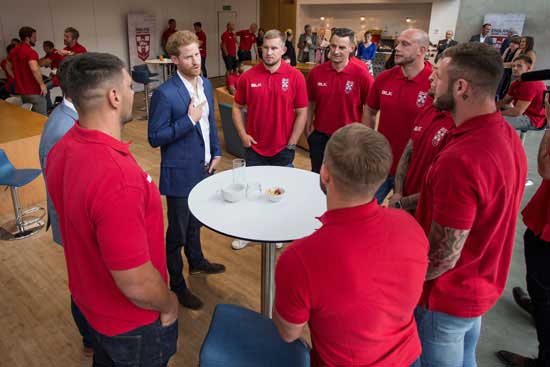 As part of a trip to Manchester where Prince Harry visited a number of organisations and projects which each work in different ways to support sections of the city’s community, the sport’s patron met the England Elite Performance Squad at their final meeting ahead of the 2017 Rugby League World Cup.

“I know he met a few of the players at a Sky Try festival event a couple of months ago but I’m pleased for the rest of the squad that they got the chance to spend time with our patron and see how passionate he is about our sport and the national team.

“It’s moments like these that give you that extra boost before a major tournament and shows the support that is there for the squad as we aim for World Cup success.”

The Rugby League World Cup takes place in Australia, New Zealand and Papua New Guinea this year and features 14 teams. England will play Australia in the opening game of the tournament in Melbourne on Friday,

October 27 and a further two group games against Lebanon in Sydney and France in Perth. The final will be held at Suncorp Stadium in Brisbane on Saturday, December 2.