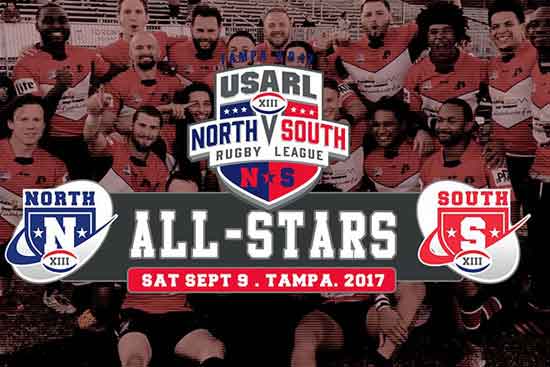 Update 8/9/17 **** Due to Hurricane Irma the All Stars match has been cancelled. Stay safe everyone! From the team at Rugby League Planet. ****

The match, to be played in Tampa, FL, on Saturday, September 9, 2017, will be one of the final times players can impress national team selectors before the USA’s Rugby League World Cup squad is announced.

The 23-man American squad will be selected after Game 3 of the Rugby League Americas Championship in Toronto on September 16.

“I think the North vs South match will be a much more intense and competitive game than in the past,” said USA Rugby League chairman Peter Illfield.

“The expectation is that players will step up to the higher level of play.”

Because of the hurricane the All Stars game in Tampa has been called off.