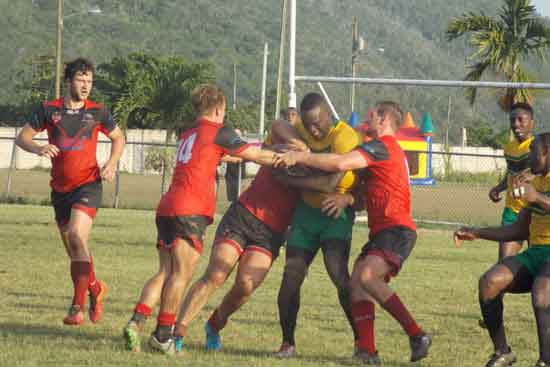 The Jamaica Reggae Warriors have written themselves into the record books by upsetting Canada 28-14 in the Rugby League Americas Championship in Kingston, Jamaica.

Playing their first ever Test match at home, the Jamaicans scored first and maintained momentum to go on to clinch victory in Game 2.

The Jamaican team thrilled their parochial home crowd by taking an 18-6 lead into halftime.

Playing some methodic football, something they couldn’t do in Game 1 against the USA, Jamaica scored first through fullback Joseph Shae, before Canada’s Rick Schouten got one back for the visiting Wolverines.

But just when the Canadians might have thought they were getting Jamaica’s number, the Reggae Warriors stepped it up a notch and put more tries on the board to put a little more daylight between themselves and their opponents before the intermission.

Kenneth Walker scored twice and then five-eighth Fabion Turner went in for Jamaica, with Aaron Jones-Bishop converting one of the scores.

The two sides came out for the second forty determined to get on top, but it was the home team that got the jump on the opposition.

Kareem Harris dotted down for the Jamaicans, but Wolverines winger Tony Felix kept the visitors in touch with a try of his own to make the score 22-10 to the homeside with around 60 minutes gone.

Jack Couzens then got Canada closer with a try, but it was too little too late.

The final quarter of the game saw the two sides go back and forth as each tried to gain ascendancy, but alas, the mountain was a little too high for the Wolverines to climb and the Reggae Warriors held on for a much-needed win.

Steve Miller sealed the deal for Jamaica when he crashed into the try zone, Jones-Bishop converting.

“We were very confident about what we could do and ultimately the pace out wide shown by our backline was the difference in the game.

“Our forwards were also up to the task and stood up well.”

Canada lost three players due to injury, all in the first half, which didn’t help their cause.

“I thought we were coming in hot, but we didn’t,” said Canada head coach Ben Fleming. “They played really well and got us on the hop and we never recovered.

“At the end of the day, we just didn’t adapt. It’s pretty disappointing to be honest.”

The victory broke Canada’s dominance in this rivalry. Jamaica hadn’t beaten the Wolverines since their very first meeting in 2010, although they did play an 18-18 tie in 2015.

The result means the Jamaicans are still mathematically in the hunt for the Americas Championship, although they will need Canada to beat the United States, and by a big margin, in Game 3 next month in Toronto.

Canada has a match against the Rugby League World Cup bound Fiji on September 9 in Vancouver that coach Fleming said they will use to figure out where they went wrong in Kingston before taking on their archrivals a week later.