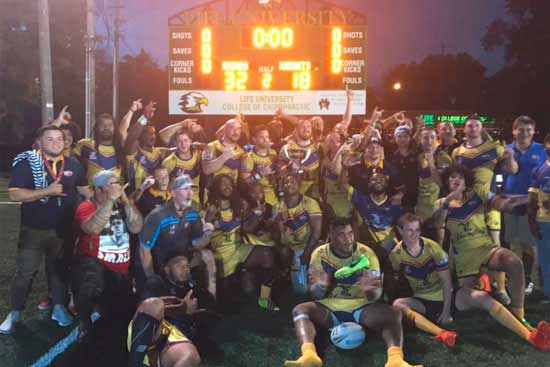 The Atlanta Rhinos have been crowned the 2017 USA Rugby League (USARL) national champions.

The Rhinos came from behind to beat the New York Knights 32-18 in Saturday’s USARL championship game at Life University in Atlanta to claim their very first national title.

“This is all we wanted,” said Rhinos captain Nick Newlin after the game. “We’ve been here for four years and this is what we’ve been playing for.

“This was the toughest game of club rugby league I’ve ever played.”

The home team started slowly and quickly found themselves down by a try within the opening minutes of the match.

Towards the end of the first quarter they had a man sin-binned for back chatting the referee, but despite all that they fought on to eventually triumph over the highly-fancied Knights.

Alex Foster opened the scoring for New York early in the piece when he finished off a movement to give the visitors a 6-0 lead.

Atlanta rebounded from their early setback to play their way back into the game and made it 6-4 when Nick Barthel scored out wide, the first of a pair of tries he’d post on the day.

Max Pierce and Terrance Williams, who also bagged a brace in the match, followed with two more tries for the Rhinos in the second quarter to give them a 10-point cushion and a 16-6 lead at the main break.

The Knights got one back early in the second stanza to trail 16-12, but then Atlanta turned up the heat on what was already a very hot day in the Peachtree State and ran in two more converted tries by Barthel and Williams to build a commanding 28-12 lead.

Again New York replied with an unconverted four-pointer of their own, but by that stage the gap was just too big to peg back and a final try by each side brought the scoring to a close.

It was the final game of rugby league for Rhinos’ forward Salesi Tongamoa, who had announced prior to the match that he would retire.