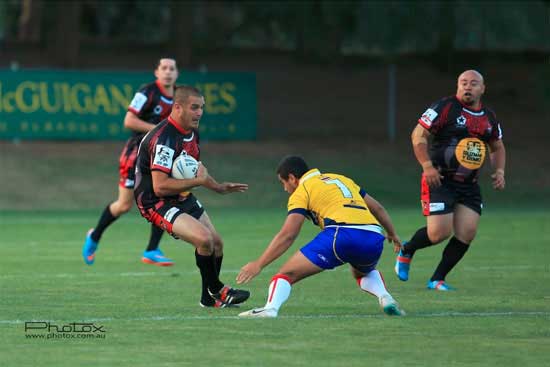 Latin Heat in recent days has announced a new coach, new board members, the re-signing of several sponsors and further details for the Latin American Championships.

Inaugural Latin Heat co-captain Jye Sommers (Peruvian Heritage) has been given the reigns to coach the Latin Heat Development Team against ASEAN (Combined Asian Team) on September 30th at Liverpool All Saints in Sydney. He will also coach the Elite Latin Heat Team against Africa United at Cabramatta’s New Era Stadium on October 14.

Sommers brings much experience into his new role as coach having captain/coached Corrimal in the Illawarra League to three different premierships and has also played for various Police representative Rugby League teams.

His first contact with the Latin Heat was messaging the Latin Heat Facebook Page to simply buy a jersey in memory of his Grandfather who was born and raised in the port district of Callao in Peru. Little did he know that a month later he would be pulling on the boots for the first Inaugural Latin American Rugby League team against the Philippines in a full International Match on the Gold Coast in 2014.

Since then, Jye has appeared for both the Latin Heat and Peruvian Rugby League team over the last few years. He even captained the Elite Team to their biggest international victory, a 52-16 victory over the Thailand Stars in Canberra in early 2016. Jye’s leadership and Rugby League experience is one that the Latin Heat felt would be beneficial to help coach the team moving forward.

The new applicants, along with the original Latin Heat Board members of Chris Reid, Diego Arellano, Robert Burgin and Current President Daniel Godinez make up the new look board. They will look to oversee the Latin Heat moving forward and how best to direct the organisation advancing into the near future.

New Sponsors
The final piece of good news for the Organisation this week is of the re-signing of three Sponsors which include SHIELD Security, Colombianos en Brisbane and Retro-com Digital TV Specialists.

In Further good news, the very first Continental Latin American Championship will occur on November 17 and 18th in Los Angeles, Chile. The national teams of Colombia, Mexico, Argentina and Chile have confirmed their attendance with players from all domestic leagues and possible players from the UK, USA and Australia planning on playing in the tournament. The tournament has had to be switched from the earlier-advised location of Santiago due to a clash with the Chilean federal election.

Argentina won the Primer Torneo Sudamericano in 2016 in Miramar, Argentina defeating Chile in the Final. Both teams went through three qualification matches undefeated in the 9-a-side tournament.

This year’s tournament will be different in the sense that all four teams will bring squads of 20 players, with ech game being 17-a-side over 80 minutes.