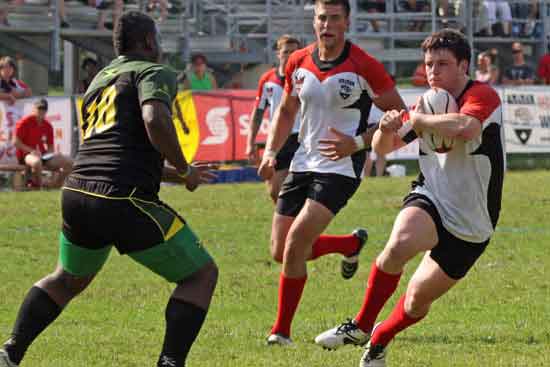 Rugby League history is about to be made with Jamaica set to host its first ever Test match.

Game 2 of the 2017 Rugby League Americas Championship is scheduled for this coming Saturday, August 26, when the Reggae Warriors will be at home to Canada in Kingston.

It has been a long time coming with the Jamaicans having played all of their international matches on foreign soil since bursting onto the scene in 2009, but they’re ready for it.

“I suppose there is always that emotional high you get when playing at home,” said Jamaica Rugby League director of rugby Romeo Monteith.

“If the opposition is way ahead of you, it doesn’t make a difference, but if the teams are close in skills and game smarts, it might be the game breaker.

“This Canadian squad is relatively unknown to me as there are several BC guys in there who I don’t know, but if history is anything to go by, their skill levels should not be too far ahead of ours.

“They are usually more controlled and disciplined, working the game through their big forwards, we don’t expect anything different. It comes down to whether we can defend the ruck and their big guys all day.”

In their last hit out in July, the Jamaicans were dominated by the USA and sustained a heavy defeat in the opening game of the Americas Championship.

They were found wanting on both offense and defense. Missed tackles, too much dropped ball and a glut of penalties, combined with an anemic offensive output all contributed to a disappointing result.

However, despite that sub-par performance, the home team is confident of being able to lift for the big occasion.

“We are going through a rebuilding process of the national team,” continued Monteith.

“Several senior players have made themselves unavailable for various reasons, so we have guys unaccustomed to the intensity of international football and the fitness level required.

“That being said, I do believe our squad can compete effectively against Canada. If we complete a high percentage of our sets and defend as a team, I believe we can be very competitive even though we are clear underdogs.”

Monteith goes on to say they completed just seven of their 12 sets in the first half of Game 1 against the Hawks, so this time they will be looking for a better first forty.

“Players need to make better decisions and not try to score on every set.

“If we have possession of the football then we will be in the game. Our fitness should be up a notch as well, so perhaps where game smarts are lacking, players can compensate by being energetic and working overtime to limit the scoring opportunities for Canada.”

So, after analyzing where they went wrong last time, tweaking their game plan and improving their combinations and fitness, the big question is can they win at home? Can they write themselves into the record books in a positive way by closing the deal in front of what will undoubtedly be a very vocal and parochial home crowd?

“We go into every game believing we can win, this one is no different,” added Monteith.

“We respect Canada and the toughness they bring to the table. We haven’t beaten them since 2010, so we have plenty of motivation to go out there and perform well at home.”