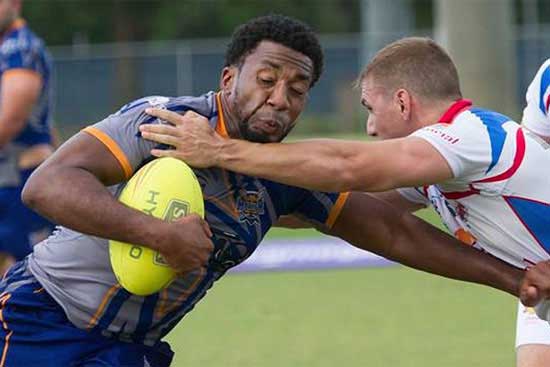 This weekend’s USA Rugby League (USARL) Conference finals are looking to be highly competitive matches as the top four teams in the league duke it out for the right to play for the 2017 league championship.

The North Conference final will be between the New York Knights and Brooklyn Kings, while the Atlanta Rhinos will lock horns with the Tampa Mayhem in the South Conference championship game.

The Knights and Kings qualified with semifinal wins last weekend against the Northern Virginia (NOVA) Eagles and White Plains Wombats respectively. The Rhinos and Mayhem had a bye after securing their conference final berths a week earlier in the opening round of the South Conference playoffs.

Despite being favorites to win it all and having beaten Brooklyn twice during the regular season, Knights head coach Guillaume Cieutat says that record is irrelevant.

“Quite honestly, if anything it favors the Brooklyn team in terms of motivation as I believe that being the underdog is a more comfortable position to be in for this type of game,” he said.

“As far as we’re concerned, we just want to play our brand of footy. That’s been our key performance
indicator all year – time spent in control versus time spent under the pump.”

Cieutat says the Knights went through two physical encounters in Rounds 8 and 9 against the Boston 13s and NOVA and were tested, so they are expecting nothing less, if not more, on Saturday.

“This is an historical game for them and I wouldn’t be surprised to see them fire early and ask us a
lot of tough questions,” he added. “How much in-control we will remain during those phases will be key.

“Additionally, Brooklyn has a sharp 9-7-6-1 spine that they imported this year, so they are able to move the football dynamically.

“Any team with good transmission requires quick and accurate reading in defense, so hopefully we
will be up to the task!”

That said, Cieutat is quietly confident that New York has the talent and game plan to get the job done.

“When in sync with our game plan, our boys can be hard to stop in terms of momentum.

“It’s our ability to generate our own momentum that will be critical.”

The South Conference final is set to be played in Atlanta, a venue where the home town Rhinos are unbeaten this season.

They were given a shakeup at home by Tampa when they played out a high-scoring 30-30 tie late in the regular season, but are the only other undefeated team in the league besides New York.

The South Conference championship game is scheduled for a 2pm (EDT) kickoff Saturday with the North Conference title match set down for later in the evening at 7pm (EDT).