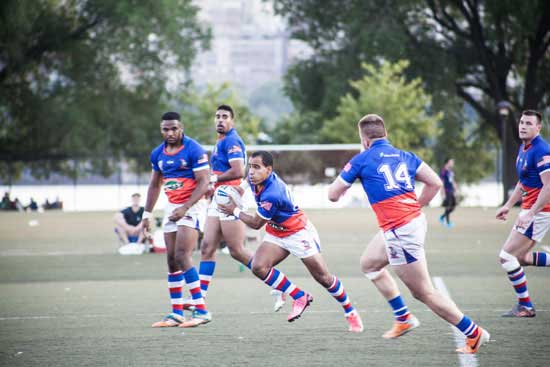 It will be an all-New York showdown in the USA Rugby League (USARL) North Conference championship game in the big apple.

The New York Knights and Brooklyn Kings will slug it out for the right to contest the USARL championship following their semifinal wins against the Northern Virginia (NOVA) Eagles and White Plains Wombats respectively.

In a high-scoring affair, the Knights took down NOVA 42-20 in one semi, while the Kings were big 46-10 winners against the Wombats in the other match.

Flyhalf Jovanny Perez topped the count with a pair of tries, while fullback Alex Foster, center Taye Daniels, second-rowers Mike Brown and Curtis Cunz and lock Mitch Winters all chipped in with singles. Halfback and goalkicker Neil Thorman was Mr Money on the day converting all seven scores.

Brooklyn, who finished second behind New York in the standings in the regular season, were even more clinical in their 36-point triumph over the Wombats.

Saturday’s Conference final shapes up to be an exciting contest as the Knights and Kings had the two best point differentials in the North and scored more points than anyone else in the conference other than the Boston 13s.

The title game is set down for a 7pm kickoff at Pier 40 in New York City.