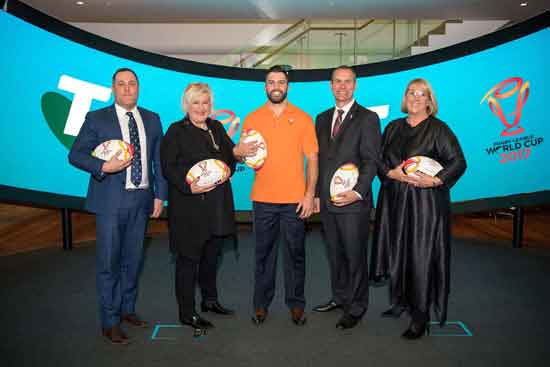 Rugby League World Cup 2017 (RLWC2017) is delighted to announce Telstra as the Official Telecommunications and Technology Partner of the tournament in both Australia and New Zealand.

In celebrating the announcement of their partnership with the RLWC2017, Telstra is giving its customers even more reason to be part of the action with 20% off RLWC2017 tickets with Telstra Thanks.

As an Official Partner of the RLWC2017, Telstra will receive brand integration at matches played in both countries through in-stadia, virtual and LED signage.

Andrew Hill, RLWC2017 CEO said: “We are delighted to welcome Telstra as the Official Telecommunications and Technology Partner of this year’s Rugby League World Cup, a company with such a rich history in supporting the greatest game of all.

“Telstra’s strong presence and servicing throughout Australia complements our tournament schedule, where the sport’s premier international event will be played across the country with matches in Australian Capital Territory, New South Wales, Northern Territory, Queensland, Victoria and Western Australia.

“We are excited to be working with Telstra and our other commercial partners to deliver the best ever Rugby League World Cup, an event that will celebrate the game, inspire communities and entertain the world.”

On announcing the news, Joe Pollard, Telstra’s Group Executive Media and Marketing said: “Sport is part of our DNA at Telstra and it’s fantastic to be able to extend our support of Rugby League through our partnership with this year’s Rugby League World Cup. The event will be passionately supported across the country; at the games and via our broadcast partnership with the Seven Network.”

The RLWC2017 will be co-hosted by Australia and New Zealand with three pool matches in Papua New Guinea from 27 October – 2 December 2017 and features 14 teams, contesting 28 games, in 13 cities. The tournament will be the biggest event in the region during 2017, with an estimated event record of 450,000 fans expected to attend the RLWC2017.