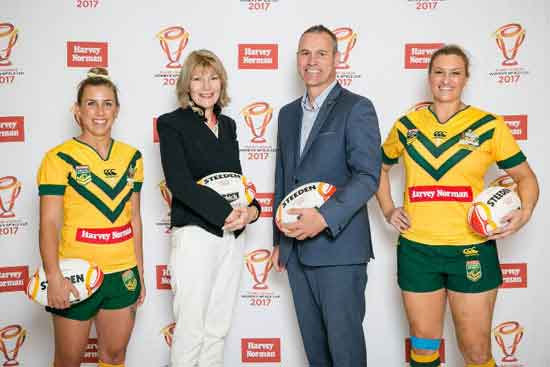 Australian selectors have named an inaugural Harvey Norman Jillaroos Merit Team, based on those who played as part of the recent Women’s Interstate Challenge.

The announcement follows the recent confirmation of the Kangaroos Origin Merit Team.

“We’re fortunate to have an incredibly talented and committed playing group at the elite level of the women’s game and at a time when women’s pathways in rugby league has never been stronger,” Mr Donald said.

“Those in this Merit Team not only deserve to be named due to their on-field performance, but every one of them has gone above and beyond to include and embrace new audiences, fans and participants, particularly in the lead up to the Interstate Challenge.

“As a Jillaroos squad, which includes a majority of members from both Interstate Challenge teams, a representative from each Affiliated State, and a member of the victorious Australian Defence Force World Cup winning team, we now set our sights on preparing for the Rugby League World Cup.

“Whilst those who were named in the inaugural Merit Team deserve recognition, we refocus now as one team with one goal and that is to defend the World Cup on home soil.”

The Harvey Norman Jillaroos will kick off their World Cup preparations with a camp next month, with 8 August marking 100 days until the Women’s Rugby League World Cup 2017 matches get underway.

The pool matches and semi-finals will be played at Southern Cross Group Stadium in Sydney from 16 – 26 November, with the men’s and women’s finals played as a double-header at Suncorp Stadium in Brisbane on 2 December.

Tickets to all women’s Rugby League World Cup 2017 matches are on sale now at www.rlwc2017.com