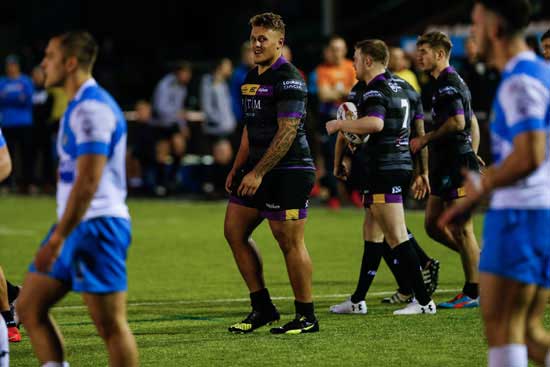 Cook Island international prop Vincent Rennie has become Newcastle Thunder’s first signing for the 2018 season, after agreeing to a new deal that takes him into a third season with the Kingston Park club.

A hugely effective prop, Rennie has brought his blockbusting style of play to bear for Thunder both as a starting player and an impact interchange over the course of his time with the club and has already made 40 appearances and scored 14 tries.

Originally joining the club in January 2016, Rennie and his young family have firmly settled in the North East making the decision to extend his stay a simple one.

His place in Thunder folklore has already been secured following a typically ebullient collision with Fuifui Moimoi in May’s match against Toronto Wolfpack, from which the former New Zealand and Tonga international emerged distinctly second best.

Rennie said: “I’m happy to be sticking around for next year. My family has settled really well in Newcastle and we have a good bunch of boys at the club so there were no negatives to staying on.

“We in the middles are gelling well and now know how each other plays and that is starting to pay off, so hopefully I’ll just be the first in that group that is still here next season.”

Head coach Jason Payne said:” We are delighted to have secured Vinnie for 2018. He is a young player with his best years ahead of him and I’m sure he will continue to develop and reach his full potential.

“He works hard every day and never gets complacent; these qualities that he possesses are exactly why we want him to be part of our club for years to come.

“Aside from his talent, Vinnie is also great to have around the team. He has a young family which makes him incredibly focused and on top of that he is a pleasure to coach.”