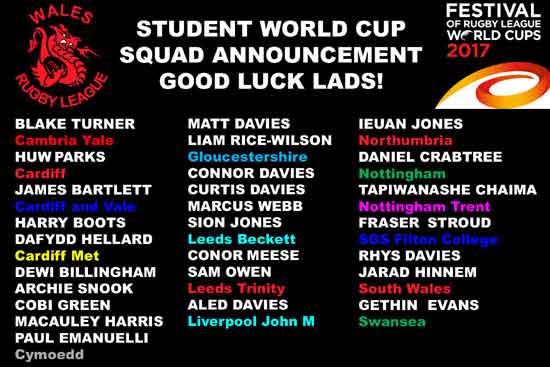 Wales Rugby League Students will leave for the World Cup this Thursday with a 26-man squad, that will be reduced to 24 before the tournament starts.

The squad contains a number of players who have already played professionally.

Cobi Green made his professional debut last week for the Ironmen, Huw Parks has also played for them this season, whilst mature student Paul Emanuelli is the League 1 club’s record points scorer. Dafydd Hellard and Rhys Davies have also turned out for the club, whilst Blake Turner of Cambria Vale College is a regular in the North Wales Crusaders side.

Following a five-day training camp and a warm-up friendly match, they’ll compete in opening game of the competition where they’ll take on Scotland.

Wales, who are coached by Latham Tawhai and managed by Mark Jones, will also face England and New Zealand in tough qualifying stage of the six-team competition.

The side had a farewell dinner in Deeside last weekend where former Wales Students and senior coach Clive Griffiths and former Great Britain international Andy Gregory were the speakers.

Speaking to the squad on Saturday evening, he said: “It’s a massive achievement for all you all to be going to the Student World Cup in Australia. You can expect a tough time, it’s a gruelling schedule, you have to back up games, playing every three days, and your resolve and physical toughness will be tested. You’ll find out more about yourselves on this tour than at any other time during your career. Good luck and I wish I was coming with you. Do your best to bring the World Cup home to Wales.”