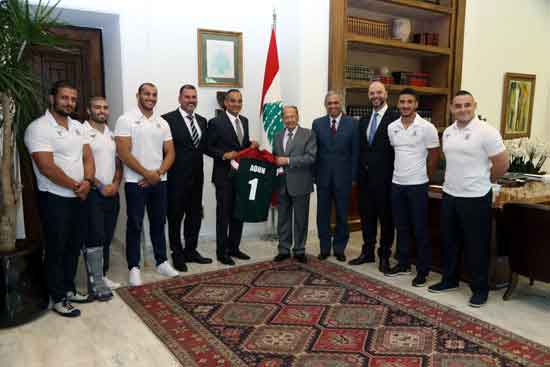 The President of the Republic of Lebanon, Michel Aoun, has welcomed a delegation from the Lebanese Rugby League Federation to the presidential palace in Baabda.

The invitation was to formally back the Cedars’ appearance in the forthcoming Rugby League World Cup, where they will initially face co-hosts and favourites Australia, along with England in Sydney and France in Canberra, in Pool A of the tournament.

Six domestic players will be part of the squad and the president encouraged the Lebanese community to support them in their quest.

“It is with honour that we presented President Aoun with the Cedars jersey,” said Habbous. “We are excited at the opportunity to see the entire, passionate nation supporting our team in the World Cup. The domestic player’s inclusion in the train-on squad is a huge step forward for our local development.”