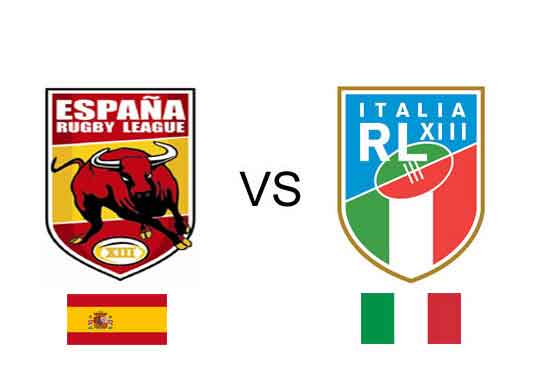 An international festival of rugby league will take place in Saluzzo tomorrow (Saturday) as Italy meet Spain. The respective senior and U21 national sides will play in the Piedmontese town and there will also be a local women’s match to complete the day.

“It will be great to promote rugby league in this part of Italy,” said their men’s head coach Kelly Rolleston. “It’s fitting that the match is being played in Saluzzo after the massive effort they have made this year playing a side in the French Championship. We will be looking to improve on our performance last week against Lebanon in Beirut and have made several changes to the team that narrowly lost 6-4 in a bid to give more of our domestic players international experience.”

Lorenzo Luccardi and Davide Spinnato, both capped, have been added to the squad, with Michele Marao, Lucas Bruzzone, Carlo De Carli, Paolo Rodasta and Cristian Mairone all making their debuts.

Spain men’s head coach Darren Fisher noted: “It’s our first game of the year and an historic moment for us, having the seniors and U21s both playing in matches in Italy together with the women. It’s also a great opportunity for me to reward the standout domestic players with debuts. We will be hoping to assist Italy in their preparations for the World Cup in October, as they did for us as we entered the Euro C matches in 2015.”

Andrew Pilkington, Spain U21 coach, added: “I’m excited to see just how far we have come and identify what we need to work on in the future.”

Spain played two such fixtures in 2015 against a BARLA Emerging Lions side. Pilkington is keen to get the team more games to satisfy their enthusiasm, with some players driving six hours from Andalucía to meet the bus for the 14-hour journey to Italy.

“Having our first match away from home is yet another experience for a young group who can grow together. On a domestic level, Italy is somewhat of a model for us as we look to follow in their footsteps in terms of development.”