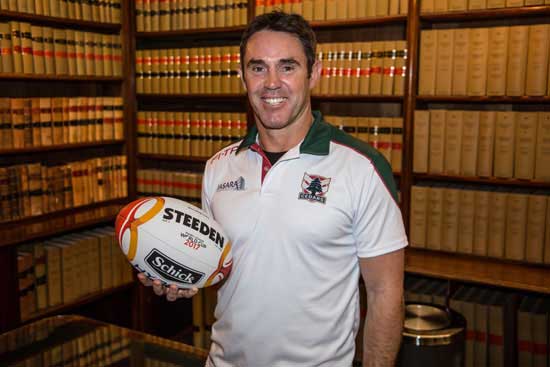 The Lebanon Rugby League Federation (LRLF) is delighted to announce the appointment of Brad Fittler as the new head coach of the Lebanon national team. The former Kangaroo captain and two-time World Cup winner will take charge of the Cedars at this year’s Rugby League World Cup. Fittler will take charge of national team’s operations effective immediately.

Fittler has a wealth of coaching experience at the representative and NRL level, having overseen the City Origin side as well as the Sydney Roosters from 2007-2009.

The former NSW Blues great said he is looking forward to not only the opportunity of helping to grow rugby league in Lebanon and but also using his expertise to guide the Cedars on their journey to the 2017 World Cup.

“The opportunity to guide a developing nation to this year’s Rugby League World Cup was one that I’m eager to take up. I also look forward to going to Lebanon to provide knowledge to assist them further develop their well-established local championships,” Fittler said.

“Lebanon’s draw is the toughest possible – France, England and Australia have over 300 years of history, against Lebanon’s 15. However, I know the Lebanese are clever, hardworking, courageous and industrious, and will no doubt be up to any challenges, as they have proven in rebuilding their nation and in the positive contribution their diaspora has made throughout the world – with no better example than in Australia.

“The thing about history is that there are moments which can turn it in certain directions. This is our opportunity to be part of history and to continue making a social impact on Lebanon’s civil society through rugby league.”

LRLF CEO Remond Safi hailed the appointment as a positive outcome not only for the Cedars’ World Cup campaign but also the continuing improvement of the game in Lebanon.

“Brad’s appointment shows that the LRLF continues to pursue excellence of standards and is confident of competing in the World Cup behind an elite coach,” said Safi. “The LRLF was really pleased with the calibre of candidates who applied for the role, but Brad’s ability and desire to engage with the Lebanese rugby league community, not just the national team, has been the most pleasing aspect of our discussions. On behalf of the LRLF, I would like to welcome Brad on board and we are all really excited about working with him.”

Fittler will head out to Lebanon between July 2017 – March 2018 to experience the unique Lebanese rugby league scene for himself, meet the federation’s stakeholders and assist in cultivating the LRLF’s technical pathways. The five local leagues have just concluded their respective seasons. The LRL club competition sits atop two College and two Schools divisions, while a women’s league is scheduled to commence in the upcoming season, which starts in October. Lebanon also has three levels of youth national teams.

Fittler is sponsored by Jasara Constructions, who recently came on board as a partner of the Lebanon national team.

Lebanon has been drawn in Pool A of the tournament and will play Australia, England and France, with the top three teams from that group progressing to the quarter finals.