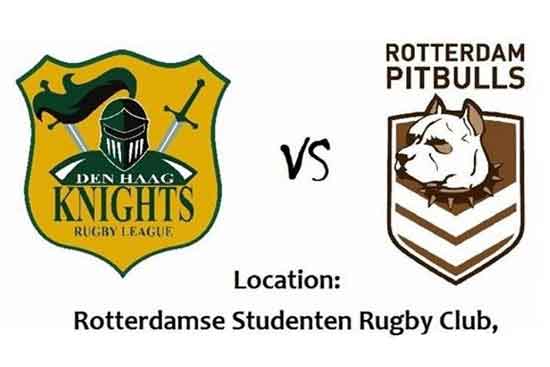 Saturday will see the end of the most comprehensive Dutch championship so far, with Rotterdam Pitbulls and Den Haag Knights facing each other in the Grand Final at the Rotterdamse Studenten RC.

Both sides finished on level points after the regular season whilst in the curtain-raiser, Amsterdam Cobras face newcomers for 2017 Hardewijk Dolphins in the play off decider.

In their two meetings so far, Rotterdam overcame a half time deficit to win 32-20 in The Hague and two weeks later in Amsterdam, the Knights exacted revenge hammering the Pitbulls 52-18, they were the pair’s only losses to date.

“The competition has been very physical but we have had the depth to field a decent side each game,” said Rotterdam coach Jason Bruygoms. “We hope to be back at full strength for the Grand Final as Den Haag will come out firing without a doubt.”

Dutch rugby league stalwart Ian Thompson, head coach of Den Haag, noted: “We’re looking for that elusive Grand Final victory for the third year in a row and hopefully we’re peaking at the right time. With two contrasting styles of rugby – the Pitbulls’ big forwards against the more open play of the young Knights backline – it makes for a fascinating contest.”

Thijs van der Zouwen, president of the Nederlandse Rugby League Bond, is looking forward to a fitting climax to what has been a highly encouraging, expanded season.

“The NRLB found the 2017 competition to be very positive and competitive,” he said. “It’s good to see the level of play improve each year with the teams gaining more experience and pushing each other. Harderwijk, on debut, have impressed, Amsterdam improved and the decider is too close to call.”