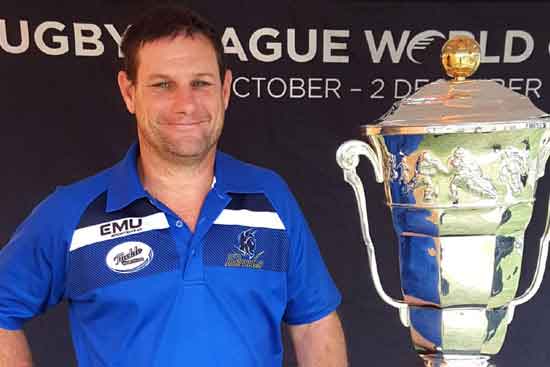 Newly appointed assistant coach for the USA Hawks, Mark Gliddon, says he’s very excited about the opportunity given to him in the lead up to the 2017 Rugby League World Cup and is up for the challenge.

He’s now on the staff of head coach Brian McDermott, the Leeds Rhinos coaching mentor who guided the Hawks through the RLWC Americas Region qualifying series in 2015.

“I can’t wait,” said Gliddon. “We’re going to the next level of footy. The World Cup is the pinnacle.

“I’m really looking forward to working with Mac. I remember him playing, he’s an ex-Great Britain international front-rower and an ex-boxer in the Marines, so that tells me he’s a hard bastard.

“And he’s doing a terrific job with the Leeds Rhinos in the Super League.”

Gliddon, who coaches the Norths Devils in the Intrust Super Cup competition in Queensland, Australia, says his appointment was a little while in the making.

“I had a meeting with Steve Williams, one of the directors of the USA team, about two years ago when they were looking for an assistant coach and I threw my hat in the ring,” he said. “But I didn’t actually get it.”

Brett Kimmorley was originally named as assistant coach, but due to the sad passing of his wife he stepped down leaving the position open.

USA Rugby League (USARL) then went back to their shortlist of applicants and after a phone hook-up with McDermott, Gliddon got the gig.

He says he’s going to be pretty busy between now and October when the Hawks kick off their RLWC campaign.

“I’m having a look at some players and doing a bit of homework for Mac,” continued Gliddon. “He sent me through some game day structures and so forth, so I’ve got to get my head around them.

“They’ve sent me a list of Australian-based players who are eligible, so I’ll look through them. There are a few running around in Queensland and a few in the NRL and I’ll keep communicating with Mac.”

Gliddon, who’s originally from England, admits until recently he hadn’t been following the USA’s progress, but that has all changed.

“I coach full time for a living and obviously I concentrate predominantly on Norths, but now that this has been thrown up I’ve got to broaden my horizons.

“I’m really looking forward to it. They’re a developing country and they have a very proud history.”

The Hawks have been slotted into Pool D to compete against Fiji, Italy and co-hosts Papua New Guinea (PNG).

Gliddon concedes while he’s not yet fully up to speed on Fiji and Italy, he does know a thing or two about PNG as the Hunters play in the Intrust Super Cup and he describes them as a good ‘footy’ team.

The USA squad will be based in Townsville and will likely have only a short preparation time before their opening game against the Fijians.

“I think we get two days with the players before our first game, so it doesn’t give us a lot of time, but Mac’s sending out his game plans and game structures to coaching staff.

“There’s going to be three trials over in the United States in September and they’ve asked me to go over and have a look at the games and do a little bit of coaching while I’m there.

“That’ll depend on my commitments with Norths.”