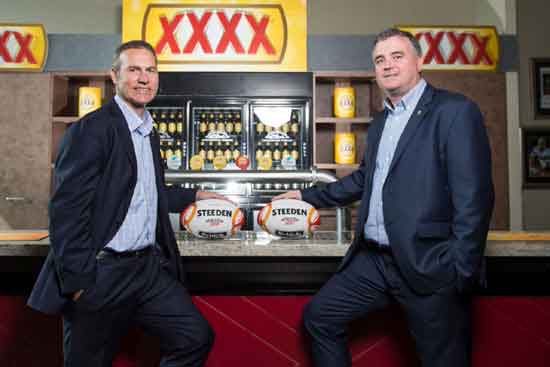 As the Official Beer Partner of the RLWC2017, Lion will receive pourage rights for the beer and cider categories at all RLWC2017 matches played in Australia and New Zealand. XXXX GOLD and other Lion products will be available in hospitality suites and functions at all RLWC2017 fixtures played across the co-hosts, plus official events held throughout the five-week tournament period.

This partnership will also see XXXX GOLD conduct consumer promotions through their on premise network across Australia, giving rugby league fans a once-in-a-lifetime opportunity to ‘Toss the Coin’ with team captains before key RLWC2017 matches. This partnership does not include naming rights on any jerseys or attire.

Andrew Hill, RLWC2017 CEO said: “Lion has been long-time supporters of rugby league in both Australia and New Zealand at all levels of the sport, and we are pleased to welcome them as the Official Beer Partner of this year’s Rugby League World Cup.”

“Lion’s popular XXXX GOLD beer has been associated with elite domestic rugby league competitions for over two decades and through this partnership, can now add the game’s premier global tournament to their portfolio. We look forward to working with Lion to deliver the best ever Rugby League World Cup.”

Matthew Windsor, Lion Customer Director for On Premise, is thrilled about the partnership saying: “We are really excited to bring the number one mid strength beer in Australia to adult Rugby League World Cup fans. Mid strength beers are a popular fixture in venues across both Australia and New Zealand, and Lion are proud to bring XXXX GOLD to rugby league fans to enjoy responsibly.”

The RLWC2017 will be co-hosted by Australia and New Zealand with three pool matches in Papua New Guinea from 27 October – 2 December 2017 and features 14 teams, contesting 28 games, in 13 cities. The tournament will be the biggest event in the region during 2017, with an estimated event record of 450,000 fans expected to attend the RLWC2017.