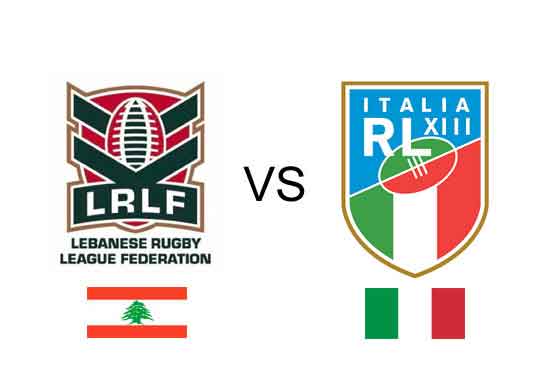 Lebanon are aiming to retain the Mediterranean Cup when they face Italy in Beirut on 3 June 2017.

Originally played for in 2002, the Cup was relaunched last season when the Cedars edged a superb game, 26-22, against the Azzurri in Sicily.

That encounter was between teams comprised of only domestically-produced players and the same stipulation will apply this year as the Federazione Italiana Rugby League and Lebanese Rugby League Federation continue to strengthen a bilateral relationship that also saw an historic women’s Test match played in February.

Lebanon’s Director of Performance Tarek Houchar who, as interim head coach, led the Cedars to a 24-4 win against Malta earlier this month, commented: “The players take nothing for granted in Lebanon; their passion, commitment and attitude towards representing the nation is exemplary. I’m excited to see some fresh new faces in our train-on squad.

“Our biggest aim is to create a culture amongst the players that can hopefully leave a great legacy behind. Retaining the Med Cup will be our objective, but playing for one another will be its own victory.”

Italy coach Kelly Rolleston noted: “The match is at the start of our domestic season and with 2017 being a World Cup year, all of our players are motivated to put in a good performance to show the coaching staff what they can offer.

“We have had a couple of camps in the north and south of Italy recently and the amount of young players present and the enthusiasm shown by all involved was impressive. This is the first of a number of opportunities that our domestic players will have this year to put their hand up for the autumn.”

The Mediterranean Cup was launched in 2002 between France and Lebanon and played in Tripoli between the hosts, France, Morocco and Serbia for two more years before its 12-year hiatus. Lebanon is the defending, and so far only, Mediterranean Cup champion.