Rugby League Planet
Home International Rugby League News Argentina What do Papalii, Folau, Kaufusi and Sandow have to do with these...
Facebook
Twitter
Linkedin
Email 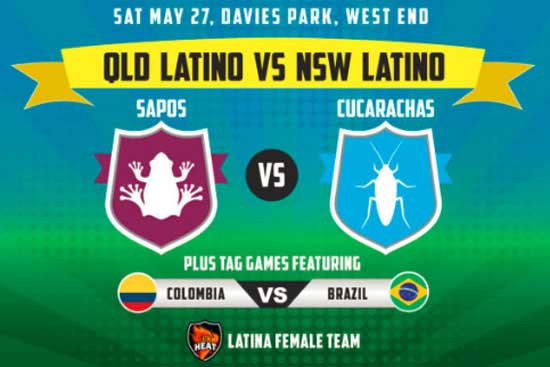 ONE PLAYER won a title alongside Josh Papalii, another played in the same team as Israel Folau, another was scouted by Manly, and another has a tournament named after him on the other side of the globe.

They’re not household names, but the Queensland Sapos are helping to change the face of global rugby league ahead of the GYG Latino Origin match at Davies Park, West End on May 27.

The players competing for the Sapos (translation Toads) against the New South Wales Cucarachas consider themselves both proud representatives of Latin America and of Queensland.

While they might live in the shadows of former teammates who went on to become State of Origin stars, they are carving out a new path for rugby league in South and Central American communities – both here and abroad.

“Until less than five years ago, Latin Americans as a broad population were largely untouched by the sport,” Latin American Rugby League co-founder Robert Burgin said.

“And although some people might consider it grandiose to say these guys are creating history, they already have to an extent.

“Through promoting the sport to friends back home, sending balls and boots overseas, and being ambassadors and advocates, they have helped start multiple competitions thousands of kilometres away.

“Last weekend we had Latinos training here in Brisbane, in Sydney, and others playing in Chile, Mexico and the USA. That’s a pretty amazing reach.”

Roughly half the Sapos team were born in Latin America, with the others being first-generation Australians, many coming from refugee backgrounds.

Among them is Oscar Mendoza, who played in the same champion Woodridge High School team that featured Maroons enforcer Josh Papalii.

Mendoza is named after Oscar Romero, a popular archbishop who was assassinated at the height of El Salvador’s unrest in the 1980s, sparking 250,000 people to attend the subsequent funeral in protest.

Several members of Mendoza’s wider family were also caught up in the civil war that lasted more than 12 years.

“Across our team – and the NSW Latino team – there are some extraordinary tales of hardship endured,” Burgin said.

“We operate Latin American Rugby League as much to promote a mutual appreciation of Latino and Australian culture and history as we do to promote the sport of rugby league.

“To us, the team is a way to offer newcomers an Aussie sporting experience in an environment that is welcoming, that helps them learn English, network to find jobs, and meet new mates.

“It’s given me a huge insight into how hard some of these guys have worked to make a better life for their families and themselves, and I hope it’s helped give a bit of identity and respect to the local Latino community.”

Coaching the Queensland Latino team will be Rodrigo Millar Pavez, who moved to Australia as a nine-year-old and learnt to play rugby league at close to a dozen clubs spanning Sydney, North Queensland, north Brisbane and Logan City.

He was the first coach to return to Chile and help referee and develop players, assisting in sparking a domestic competition which now has 13 clubs and plays a tournament named in his honour.

Sons Brad and Trent both went to Marsden State High, with Brad starting just as Cameron Smith was finishing his education and Trent playing in the same team as Israel Folau, Antonio Winterstein, Chris Sandow, Esi Tonga and Joseph Tomane.

Some other interesting ties to the NRL include Colombian-born hooker Sebastian Martinez, a junior rep player who featured alongside Patrick Kaufusi for Wide Bay and was scouted by Manly.

The GYG Latino Origin event will be held four days before State of Origin I is held at Suncorp Stadium to capitalise on the fervour of interstate rivalry – but it will also come with a purpose.

All funds raised from the day, which will also feature Latino music and food, will go towards funding teams and competitions in multiple Latin American countries.

An opportunity will also exist for fans to donate jerseys, boots, balls and rugby league DVDs to be sent abroad.

The main game between Queensland and NSW at 5.15pm will be full-contact, while two tag games will be held from 4pm to give both male and female novices a chance to try the non-contact version of the game.

Home to Queensland Intrust Super Cup team the Souths Logan Magpies, Davies Park is seen as the perfect venue to capture the attention of the community.