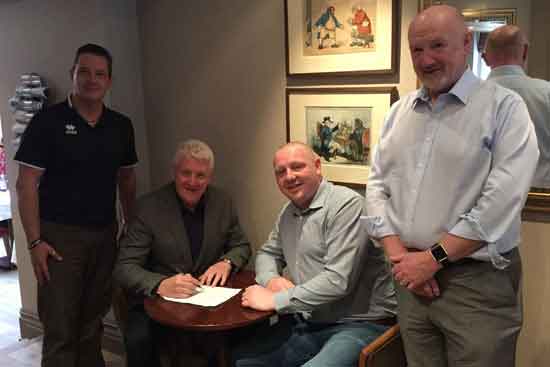 Wales Rugby League have entered into a two-year partnership with buysportskitPRO in association with errea ahead of the 2017 Rugby League World Cup.

WRL have worn the errea brand in the past, where they provided kit to the Wales under 16s and 18s sides between 2006 and 2008 but this is the first deal done between the companies that encompasses the whole organisation.

Wales Rugby League CEO Chris Thair said: “We are delighted to welcome buysportskitPRO in association with errea to our family of partners.

“They are an excellent brand with proven service, share our values and most importantly both parties wish to help each other to grow and improve.

“This will mean a new kit design for the World Cup, kits for all our representative teams and a new range for supporters to purchase in time to cheer on Wales later this year. We also plan to launch a new membership scheme with an exclusive range that will allow even more people to join us.

“It is a fantastic partner in an extremely exciting year as Wales Wheelchair, Wales Students and Wales Men enter their respective World Cups and we also have so much going on domestically. Rugby League in Wales is growing and developing a very firm foundation from which to take the next steps. With partners such as buysportskitPRO we’ll be able to do this and for that we are extremely grateful.”

buysportskitPRO’s national sales manager, James Milner, said: “Having started negotiations with Wales around a year ago, we are delighted to have finalised the deal and agree a two-year partnership alongside our premium rugby brand partners errea.

“The passion for making Wales Rugby League a success at all levels shines through, and both Brian Juliff and Chris Thair have sold the Wales project to us in a way that has left us excited from the start.

“We have a plan in place that will see not only a significant level of sponsorship to the Senior squad but also under 18s, under 16s, Students, Wheelchair and other representative sides. This is alongside an initiative to offer all semi-pro and community clubs a way to kit out their sides for a discounted cost.

“As a company, we are incredibly excited about the project getting under way and look forward to taking representatives of the board and teams over to errea HQ in Parma, Italy, to finalise the design of the 2017 World Cup Shirt and Merchandise range.”

Graham Fordy, the UK consultant at errea Sport, said: “We at errea Sport are delighted to partner buysportskitPRO in this exciting relationship.

“As a brand we have made significant progress in recent years in the RFL market and to partner buysportskitPRO with the Welsh national squad is a major milestone.

“We hope the initial agreement for two seasons becomes a much longer relationship and we continue to work together for many seasons to come. We look forward to welcoming the visiting officials to our headquarters in Parma.”

New merchandise will be available to buy online next month.