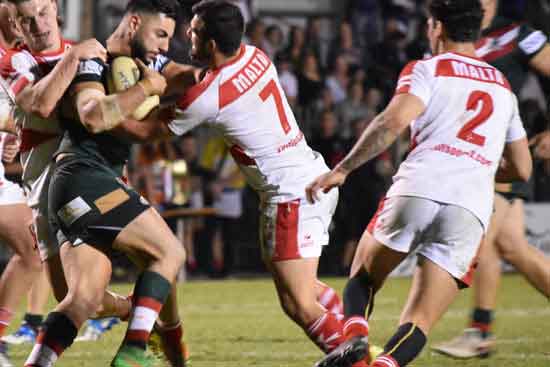 Lebanon has fine-tuned their World Cup preparations with a clinical 24-4 win over Malta in the Phoenician Cup at New Era Stadium last night.

The Cedars took advantage of a poor defensive start from the Maltese, scoring two tries in the opening eight minutes to hold a commanding 12-point lead.

From that point on, the game was very much an arm-wrestle, as Malta worked their way back into the game, matching everything that the strong Lebanese side was throwing at them.

Five-eighth Abbas Miski played a starring role for the Cedars, finishing with a hat-trick and a try assist for good measure. He also converted all four of his teams tries to finish with a personal tally of 20 points.

Captain Ray Moujalli showed why his experience and tenacity will be valued in the World Cup at the end of the year, leading his team from the front with a number of charging hit-ups that got his team onto the front foot.

Maltese skipper Jake Attard did his best to inspire his team, making a number of crucial tackles, using his pace out of dummy half, as well as providing a well-timed kicking game.

First points were scored in the opening three minutes after a line break to Abraham El-Zakhem allowed a supporting Abbas Miski to gather possession and carry three defenders over the line, giving the Cedars a dream start.

North Sydney’s Miski brought up a double just minutes later after he sliced through a stagnant defensive line to push the lead out to 12.

Malta managed to stem the flow of points in the next few sets, and was able to get some field position of their own, before their good work was brought unstuck.

They conceded an unnecessary penalty in the ruck, and from the subsequent set of six, Miski had his hat-trick after selling a dummy to the defence, giving him all 18 points after as many minutes played.

A mistake from the kick-off by the Cedars helped to give Malta a set of six in their half, and proved to be the opportunity they needed, as halfback Luke Cauchi caught the defence napping and scored from dummy half, cutting the deficit back to 14 at half-time.

After a conservative start to the second half, Lebanon was able to extend the lead after 13 minutes, as they earned repeat sets on the Maltese line, and a strong backline movement saw Danny Barakat finish, giving the Lebanese an unassailable 20-point buffer.

That would go down as the last score of the game, as the Phoenician sides continued to batter each other in defence with ruthless tackles and an unrelenting attitude.

Lebanon will play their opening World Cup match against France on 29 October, a game that will likely determine who will progress to the quarter finals of the competition.

Malta will head over to Thailand at the end of the season to compete against the upcoming Asian nation, with an eye on the Emerging Nations World Championship at the start of 2018.