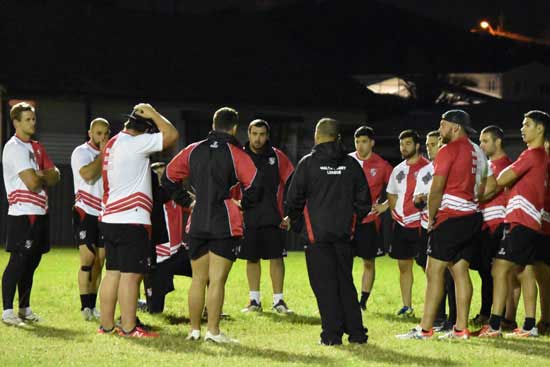 In the distance, there was people having a hit of social tennis, whilst on the lower oval, parents watched as their kids completed soccer training.

On the rugby league field however, the dedicated players, coaching staff and officials of the Maltese national team were plotting how to take down the might of Lebanon in the Phoenician Cup, the side with its own target of shocking everyone at the upcoming World Cup.

As the Sydney-based players gathered at the suburban ground, there was an air of confidence, with captain Jake Attard leading that charge.

He knows that their upcoming clash on May 6 will be hard-fought, and realises that the battle up-front will go a long way to determining the winner.

“If we win the ruck, we’ll win the game,” Attard said.

“Our biggest challenge is stopping their forward pack. Their pack is their go-to, they’ve got a lot of experience and they’ve been playing for as long as I can remember.”

It’s a healthy respect that the Blacktown Workers hooker has for his opponents, and with good reason.

With mainstay Ray Moujalli leading the charge of the Lebanese forwards, Malta will need to match their intensity and hold them in the opening period of the game.

Attard knows they have to weather the early storm that they will be faced with, however is confident that his team can play to their strengths.

“Our biggest strengths are our speed around the ruck for sure. We’re quick, fast and smart. That’s how we win games at Malta.”

Despite their upbeat attitude heading into the game, it hasn’t been easy for Malta to build momentum with their side.

They don’t have the luxury of contracts pushing seven figures, or the chance for a full-time camp.

They meet for a handful of training sessions after work without their full squad in attendance.

With what little time they do have together, they certainly make the most of it.

“We’ve got our captain’s run on Friday and then after we’ll have a team dinner and jersey presentation, as well as getting a few photos,” Attard said.

It’s the first chance they’ll have to bond together as a team, as they have players from Newcastle, Byron Bay and Queensland coming down to Sydney to represent their country.

Attard made his international debut earlier this year as captain when Malta defeated the Philippine Tamaraws, and it’s a privilege that he certainly hasn’t taken lightly

“It’s an honour to run out as captain. It’s something that I’m very proud of, and something that my family is proud of too. I won’t be taking it for granted.”