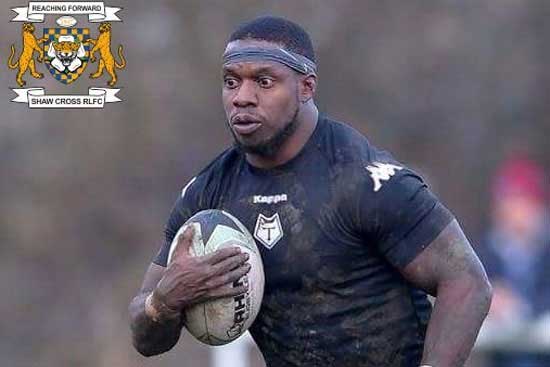 Former American football collegiate player and NFL trialist with home town Cleveland, Monte Gaddis, will join the Amsterdam Cobras as a guest player during the second edition of the revamped Rotterdam nines on Saturday (8 April).

Currently playing for community club Shaw Cross Sharks in England, Monte is working hard to learn the sport having taken up rugby league last year at open trials for Toronto Wolfpack, and he has made no secret of his ambition to play the game professionally.

During his time with the Toronto set-up, director Adam Fogerty, a former Super League star with St Helens and Halifax, was impressed with Monte’s speed, power and determination. “Monte has all the physical skills necessary to play at pro level,” Fogerty said. “And beyond his game, he has an infectious personality that rubs off on everyone around him. In just a short time he’s become a very popular and talked-about figure in rugby league, and it’s great to see him commit to the sport.”

Rotterdam tournament organizers and Cobras coaching staff are thrilled to welcome Monte to The Netherlands and looking forward to seeing his athleticism and enthusiasm light up the tournament. Cobras halfback James Cavell contacted him on social media after seeing his impressive highlights videos on YouTube and Monte is thrilled to be visiting The Netherlands for the first time.

“Rugby league has humbled me so much,” said Gaddis, who has also been showcasing his footwork to the Rugby School of Excellence Academy in Leeds and Dewsbury. “It’s a major blessing for me to get the opportunity to not only play in the tournament but also to represent the Amsterdam Cobras. I just want to thank everyone for supporting me and my dreams.”

Cobras will play against French team Nanterre 92 Les Hussards in their opening game of the eight team tournament. Cobras playmaker Cavell commented: “I’m a long-time fan of American football and have so much respect for the athletic ability of the players. Monte is going to be a real handful for our opponents and I can’t wait to pass him the ball.”

The tournament kicks off at 10am at the Rotterdam student Rugby Club, RSRC Bears Cave, Lucie Vuylstekeweg 40, 3062CT Rotterdam.