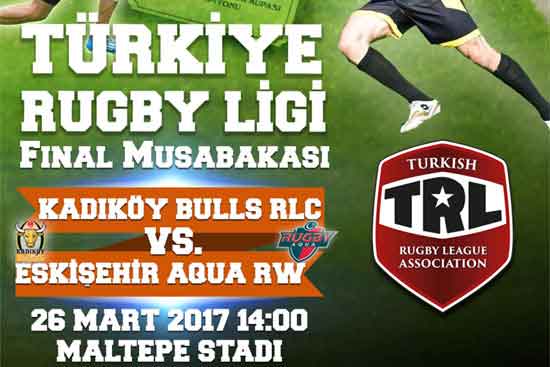 The Bulls, who play the Eskisehir Aqua Warriors at the atmospheric Maltepe Stadium in Istanbul this Sunday (kick off 2pm), are the most experienced side in the competition having supplied the majority of the Turkish squad that played an international against Greece XIII in October 2016.

Kadikoy coach – and one of the driving forces behind the competition’s creation in December – Julien Treu, believes the Warriors from the north-west of the country will provide his side with stiff opposition.

“Last time we played them we won 46 -21, however, I was very impressed with their last game against Bilgi. They are more experienced now and have some great athletes so they will be dangerous,” Treu cautioned. “From what I have seen of such as Selçuk Cömert, Selim Özdemir, Erdem Çağdaş and their captain, Emin Erden, they will be players to watch during the final.”

“We will be taking part in the Balkan Cup in a month so we wanted our players to experience a referee of George’s standing and knowledge in preparation,” Treu added. “Being one of the founders, I am very happy about the competition and the participation level.

“We are expecting a decent crowd. The interest has been building since the competition started. I am very excited about the final as it will be the culmination of all the hard work we have put in before and after the competition launched on December 25.

“I believe the final has all the ingredients to be a great game. Eskisehir will be a tough team to beat but I am confident based on previous results that our performance will be strong and we can be the first team to lift the trophy.”

RLEF Central & Eastern Europe Regional Director, Jovan Vujosevic, commented: “I am very proud of the work that the Turkish Rugby League Association has undertaken in less than a year. Their first contact with the sport was in June 2016 in Serbia and since then, with good planning and hard work, they have managed to organize coach and match official education courses, register the association and organize a domestic competition with five teams.

“TRLA will soon submit an application for observer membership of the RLEF.“

The match will be livestreamed at – https://www.youtube.com/watch?v=rG86lJpPWkg