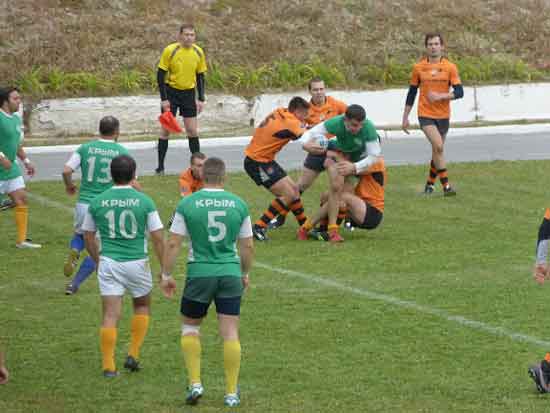 The Ukrainian Super League kicks off on 25 March with eight clubs playing in two groups of four and expectations that it will be the most competitive domestic season yet.

Group A in the west includes Sokil L`viv, Veres Rivne, Korzo Uzhgorod, and RLC Mukachevo whilst in east/central Group B, Legion XIII Kharkiv, RLC Kyiv, Korabel Mykolaiv, and Kyiv Rebels face each other.

Legion XIII has won all eight Ukrainian championship to date and five Ukrainian Cups, whilst Sokil has been the defeated finalists for the past two seasons.

“This season will certainly be the strongest in the history of Ukrainian rugby league,” enthused Gennadiy Vepryk, head coach of RLC Legion XIII and the national team. “Most teams have recruited well but we also had a good preparation period during the winter and are ready to defend our title once more.”

RLC Kyiv promises to be Legion’s main group rival having finished third in the league and runners-up in the cup last year. Their coach Evgen Zubryts`kyy is enthusiastic about his team’s prospects. “We had a great debut season last year and now we aim to be in contention.”

“For the last two years we have come in second place in the Ukraine Super League, so this year we hope to be a champions,” added Evgen Tarasenko, coach of RC Sokil, L`viv.

The Ukrainian Federation of Rugby League has invested a lot of time in fostering relationships with municipal governments to gain use of high quality facilities such as the Rivne City Stadium, which attracted 1,500 fans for the visit of the Czech Republic in last year’s European Championship C.

“We really hope that this season all our teams will show improved form on the field and a better level of organisation on game day,” said UFRL president Artur Martyrosyan. “That is necessary for the continuing development of rugby league here.”

All of the clubs operate in the face of the ongoing difficulties that beset the country: a tough economic situation and political instability in the Lugansk and Donetsk regions. The latter was responsible for major disruption in the 2016 championship when the bulk of the Donetsk team were drafted into the army to fight in the east, preventing them from completing their season.

Martyrosyan is also in contact with European Super League clubs to propose twinning with Ukrainian clubs.

In the opening round of matches, in Group A Veres will host Sokil and in Group B Legion XIII entertain Korabel.