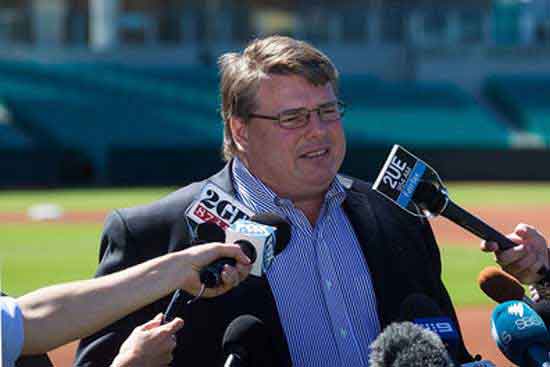 “They would have been ready in 2021.” Those comments from Jason Moore, the principal of Moore Sports International (MSI), the Australia-based organization behind the bid for the United States and Canada to jointly host the 2025 Rugby League World Cup.

Moore and MSI are leading the charge for the North American neighbors to host Rugby League’s big dance in eight years from now.

A bold plan it may be, but a big chunk of Rugby League’s international leading lights believe hosting a Rugby League World Cup in North America can not only work, but it can also turn a profit.

The Rugby League International Federation (RLIF) Congress has endorsed a recommendation by the RLIF Board to conditionally award the 2025 World Cup to North America.

In making the announcement in November 2016, RLIF Chairman Nigel Wood talked up the idea.

“The award of the 2025 World Cup to North America is an historic moment in the global development of Rugby League,” said Wood. “The USA and Canada provides world class stadia allied to a significant multicultural population which made the bid so persuasive.

“It is exciting that our sport is expanding into a new destination for our premier event the World Cup and we will work with our members in the USA and Canada and Moore Sports International to expand the presence of our sport in these countries during the lead in to the 2025 World Cup.”

Now some folks might see it as a stretch for two countries regarded as Rugby League minnows to put on the game’s biggest show, but not so much Moore, a guy who oozes confidence.

What he is driving at is bringing top line Rugby League competition to North America in order to, in effect, both introduce the game to and whet the appetite of local sports fans and he has a plan to do so.

“By educating the marketplace, by playing games, by a very consolidated marketing platform,” continued Moore. “We’ve got a fairly large budget for it.”

What’s not to like about his enthusiasm? Bring top flight games to North America, let people know about them ahead of time and then promote the heck out of them. He sees that as a sure-fire way to get butts in seats.

“We’re going to closely and strategically pick where certain teams play,” added Moore. “We’ll be looking at the environment as to expats, foreigners who live and commute in and out of the environment, as well as the College Football environment.”

Given that the Rugby League World Cup is typically played in the Fall, it could potentially clash with the NFL and College Football seasons, however, Moore has taken that into consideration.

He says they could schedule matches to be played in stadiums on off-weekends when there is no American football being played locally and he thinks late October through late November could work.

“Would I like to play it in May or June? Yes,” said Moore. “And while it’s not that bad, it’s a time of year when people are in football mode anyway.

“By the time we get there, we’ll have had Premier Rugby League played in the US.”

Of course, a lot of the detail has yet to be worked out, but plainly speaking, engagement with the American Football fan is the key.

“We will look to promote around the NFL and College Football space,” Moore goes on to say. “There’s also the rugby crowd.”

Moore is of the opinion that tapping into the Rugby Union fan base in both countries would help the cause, but when it comes right down to it, educating potential fans about Rugby League and the World Cup is what it’s all about.

“There are strategic imperatives that we need which is growing the game and things like that because we have broader plans other than just purely a World Cup,” he said. “It has to make money, that’s #1, and it will make money because of the leverage of the income streams that we have at our disposal.

“Obviously ticket sales, merchandise and corporate hospitality are three of those streams that will generate across a very vast marketplace.

“It’s certainly not without its challenges and we’ve got a lot of work to do. There’s educating the market which is probably the first thing we need to do before we start with sponsorship and the like, but we believe the market will embrace this, otherwise we wouldn’t have bid for it in the first place.”

Moore Sports International is also behind plans to kick off a professional Rugby League competition in the United States in 2018.

The league would be comprised of eight to ten teams to play from April through July with a view to building a solid fan base in the US by 2025.

There would be around 25 players per team and of the potential 250 players on the rosters, about 80 are expected to come from overseas, meaning the majority would be homegrown talent.

Details on how much it would cost to run the competition and exactly who would bankroll it haven’t been released as yet, but a formal announcement is expected soon.