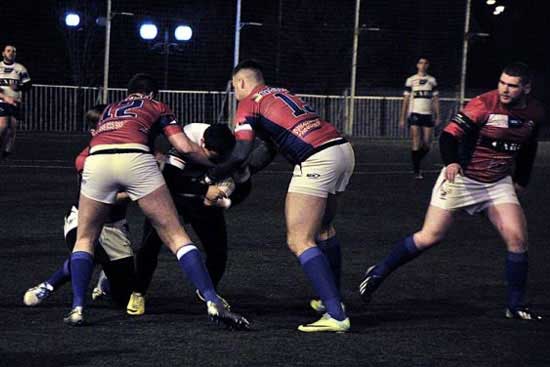 Serbia’s best rugby league players ushered in a new season, with ‘Team John’ winning a thrilling fifth Risman Cup thanks to Aleksandar Pavlović’s late converted try, to seal a 22-16 triumph over ‘Team Bev’ at the FK Bask Arena in Belgrade.

The victory avenged last year’s defeat leaving ‘Team Bev’ 3-2 up in the series, the composite sides named after the two sons of league legend, and one the sport’s greatest-ever exponents, Gus Risman.

In an intense and quality contest, ‘Team John’ drew first blood early through Stefan Ilić’s try and conversion by Džavid Jašari. But ‘Team Bev’ took the first half plaudits thanks to the 2016 SRL Player of the Year Vladimir Milutinović, who crossed for two tries in six minutes; Vojislad Dedić with a goal to give Serbian captain Dalibor Vukanović’s men a 10-6 interval lead.

Soon after the break ‘Team John’ countered with a brace for Miodrag Tomić in a blistering seven minute spell, Jašari adding one conversion to put them 16-10 in front. Ten minutes later matters were level, Miloš Zogović touching down and Dedić adding the extras.

The game breaker came in the 63rd minute, centre Pavlović breaking clear down the wing to cross, Jašari adding his third goal.

‘Team John’s’ coach Slobodan Manak commented: “It was a far better match than last year. All the boys didn’t hold anything back and it looks like they will be in the great form for the domestic season which is starting next week with Dorćol and Red Star battling it out for the SRL Super Cup.”