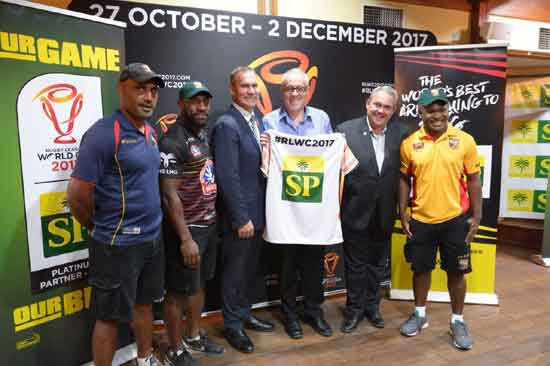 SP Brewery has been Papua New Guinea’s leading manufacturer of internationally acclaimed beers for the past 60 years and are strong supporters of rugby league throughout the country, from grassroots to the elite level – including the naming rights sponsor of the SP PNG Hunters who compete in the premier rugby league competition in Queensland.

Andrew Hill, RLWC2017 CEO said: “The Rugby League World Cup will be the biggest event in Papua New Guinea this year and we are pleased to have the support of one of the country’s leading companies, SP Brewery.”

“SP Brewery is synonymous with rugby league in Papua New Guinea and we look forward to partnering with them to deliver the greatest ever Rugby League World Cup,” concluded Hill.

As Official Platinum Partner, SP Brewery will have a branding presence in-stadia that will be seen in over 110 countries where the RLWC2017 is broadcast. SP Brewery will also produce a commemorative RLWC2017 “SP Lager” beer can, which will be available across Papua New Guinea ahead of the tournament.

Stan Joyce, Managing Director SP Brewery said: “Rugby league is still by far the most popular sport played and watched across this country and we are happy to continue our partnership with Rugby League, in particular the Rugby League World Cup, to promote this great game to the masses under our flagship brand SP Lager.”

In 2015, the RLWC2017 Organising Committee (OC) announced PNG as “Hosting Partner” alongside co-hosts Australia and New Zealand, with the country to stage the PNG Kumuls’ three pool matches against Wales (28 October), Ireland (5 November) and the USA (12 November). The three matches will be played in Port Moresby at the National Football Stadium (formerly Lloyd Robson Oval).

The RLWC2017 will be contested from 27 October to 2 December 2017, in 13 cities across the three hosting nations. The RLWC2017 will be the biggest event in the region during 2017, with 450,000 fans expected to attend the event, which would be a tournament record.

Ticket prices and on sale details for the three RLWC2017 matches to be played in Port Moresby will be announced in due course.