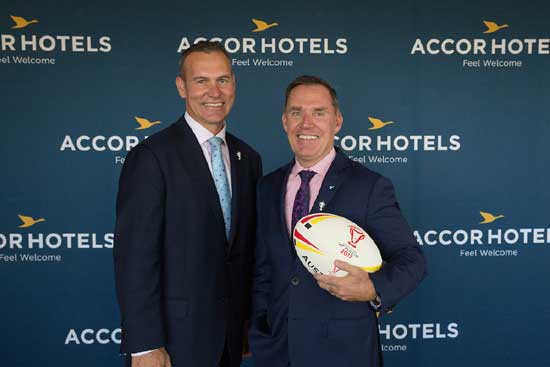 The partnership with the RLWC2017 will see AccorHotels be home for the teams, officials and tournament organisers in every Australian and New Zealand host city, across hotel brands including Pullman, Novotel, Mercure and ibis.

The AccorHotels brand will be incorporated into tournament properties, including in-stadia signage and on digital channels. Key integration will occur on the tournament’s website, www.rlwc2017.com, highlighting the AccorHotels’ properties throughout the twelve Australian and New Zealand host cities, with information and offers provided for travelling fans and stakeholders.

In addition to the men’s tournament, this partnership extends to the Women’s Rugby League World Cup to be played in Sydney from 16 November – 26 November, with the final in Brisbane on 2 December 2017.

Chief Executive Officer RLWC2017, Andrew Hill said: “We are pleased to partner with AccorHotels and we look forward to utilising the Accor network during both the men’s and women’s Rugby League World Cups.

“AccorHotels is the market leader when it comes to looking after the unique requirements of elite sporting teams, having successfully partnered with other major events in both Australia and New Zealand.

“As tournament organisers, we want this year’s event to be greatest ever Rugby League World Cup and we look forward to working with AccorHotels on delivering a first class off-field experience for competing teams, officials and guests,” concluded Hill.

Chief Operating Officer AccorHotels Pacific, Simon McGrath said: “We are delighted to have been selected by the Rugby League World Cup 2017 as their Official Accommodation Partner.

“We believe it will be an outstanding partnership that will benefit both parties considerably as we are very much attuned to the requirements of sporting organisations.

The RLWC2017 will be contested from 27 October to 2 December 2017 and hosted by Australia and New Zealand with three pool games also being played in Papua New Guinea. The tournament will be the biggest event in the region this year, with an estimated 450,000 fans to attend the Rugby League World Cup which would be a tournament record.