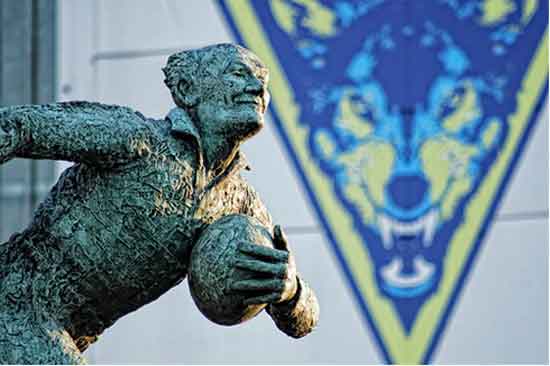 It’s been tough going for Warrington Wolves fans during the Super League era. Prior to Tony Smith’s arrival in 2009, the Wolves had struggled to challenge rugby league royalty while elite sides such as St Helens, Wigan Warriors and Leeds Rhinos revelled in their failures.

But everything looks very different for Warrington these days. The Wolves had failed to cope in the years following an emotional move away from spiritual home Wilderspool but they now appear completely settled at the Halliwell Jones Stadium. Since the beginning of 2009, Smith has led Warrington to two League Leader’s Shields and three Challenge Cup triumphs.

What’s more, the Wolves have been challenging at the top of English rugby’s ladder for some time – reaching the Grand Final in two of the last five years, including an appearance that resulted in losing 12-6 to Shaun Wane’s Wigan Warriors in 2016. Twelve months on, Warrington will be out to prove that they have what it takes to win on Super League’s biggest stage.

At the time of writing, Warrington are priced at 3/1 to win the Grand Final with bet365 and it would take a brave man to back against Smith’s new-look outfit. The Wolves have made a number of key, high-profile signings ahead of what could be a memorable year; and former Widnes Vikings man Kevin Brown might be the most important.

Brown brings years of Super League experience to the Halliwell Jones Stadium and he could be the difference maker as Warrington hunt a first title in well over 60 years. At 32 years old, he is approaching his twilight years but Brown still has the talent to slug it out with the best players in the business. With 119 tries in 285 Super League outings, Brown is capable of influencing matches with his vision, movement and skill.

With so much young talent coming through the ranks, Smith is blessed with quality in key areas and the Wolves are strong across the park. In fact, some believe that Warrington, who re-signed Michael Cooper after the local lad spent two years in Australia with the St George Illawarra Dragons, now have the best squad in Super League.

The Brisbane Broncos will head over to England for a one-off clash with Warrington as part of the DACIA World Club Series later this month and Wolves fans will be looking for a solid effort against one of Australia’s finest sides. If Smith has his side well prepared, there’s no reason why Warrington cannot push Brisbane close. They probably won’t win but a stern test could be on the cards for Wayne Bennett’s men.

Warrington have been building a title-winning monster for some time and this could finally be their year to announce themselves on the world stage. A solid showing against Brisbane could give the Wolves confidence ahead of a gruelling start to the new season and Smith will be hoping that a clash with one of the best teams on the planet will help his side to develop further.

Nothing is a given in the Super League but Warrington have all the tools to challenge for Grand Final glory this year and Wolves fans will be quietly confident of an Old Trafford triumph at the end of the campaign.