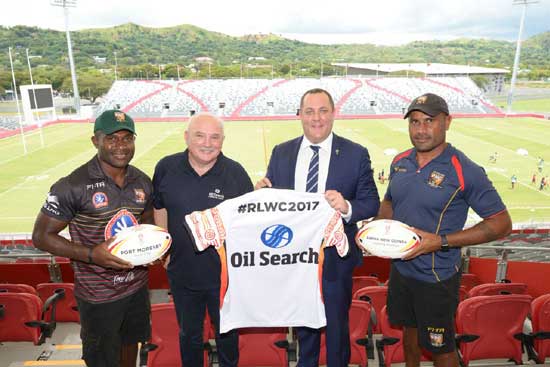 Oil Search, an oil and gas exploration and development company who first established themselves in Papua New Guinea (PNG) in 1929, have long supported the development of sport, including rugby league, throughout the country.

In 2015, the RLWC2017 Organising Committee (OC) announced PNG as “Hosting Partner” alongside co-hosts Australia and New Zealand, with the country to stage the PNG Kumuls’ three pool matches against Wales (28 October), Ireland (5 November) and the USA (12 November).

Andrew Hill, RLWC2017 CEO said: “The Rugby League World Cup 2017 Organising Committee, with the support of the Papua New Guinea Government and the City of Port Moresby, looks forward to staging the biggest event in the country this year and we are pleased to welcome Oil Search, one of Papua New Guinea’s largest organisations as a tournament Partner.”

As Official Platinum Partner, Oil Search will have a branding presence in-stadia that will be seen in over 110 countries where the RLWC2017 is broadcast. Oil Search will also partner the World Cup Trophy Tour and community program to be run by the RLWC2017 OC throughout PNG.

Rohan Sawyer, General Manager Commercial and Marketing RLWC2017 said: “The excitement and enthusiasm for this year’s Rugby League World Cup throughout Papua New Guinea is palpable, and we look forward to working with Oil Search to deliver an event that will celebrate rugby league, inspire communities and showcase Papua New Guinea to the world.”

Peter Botten, Managing Director Oil Search said: “Rugby League is the National sport in Papua New Guinea and as a proud PNG Company, Oil Search is thrilled to partner with the tournament organisers to bring this prestigious event to the country.

“This is an historic event for PNG as this is the first time that Rugby League World Cup matches will be played in the country, providing our citizens with an opportunity to watch our very own Kumuls take on international teams on home soil.

“Oil Search is also pleased to announce that people outside of Port Moresby will also have the chance to experience the spirit of the Rugby League World Cup when Oil Search takes the Paul Barrière Trophy on a national tour.

“Building on the success of the 2015 Oil Search Pacific Games Relay, Oil Search will take the most coveted prize in international rugby league throughout PNG with details to be announced at a later date,” Botten concluded.

The RLWC2017 OC can also confirm that the National Football Stadium in Port Moresby will be the host venue for the three pool matches in PNG.

The National Football Stadium (formerly Lloyd Robson Oval) recently underwent a two- year redevelopment program ahead of the country hosting the Pacific Games (2015) and FIFA Under 20’s Women’s World Cup (2016). The venue, which has a current capacity of 15,000, is also the home of the PNG Hunters and in September 2016, the stadium hosted a sold-out PNG Kumuls versus Australian Prime Minister’s XIII fixture.

“Over the past two years, the National Football Stadium has hosted a number of global events with great success and we expect these three Rugby League World Cup matches to be played in front of sold-out crowds, with an atmosphere second to none,” Sawyer concluded.

Ticket prices and on sale details for the three RLWC2017 matches to be played in Port Moresby will be announced in due course.