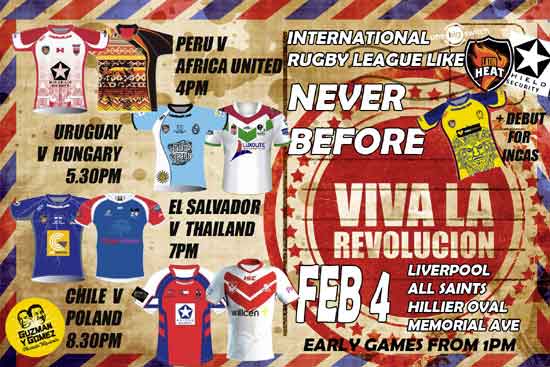 Rugby league’s foothold in new and exciting territories will be showcased on February 4 when four international matches are held back-to-back at Liverpool All Saints, in Sydney’s west.

The day will feature full 80-minute, 13-a-side men’s matches between Chile and Poland, El Salvador and Thailand, Uruguay and Hungary, and Peru and Africa United.

For Uruguay, Peru and Poland, the event will herald their debuts in full-length matches against sovereign nations.

It will also be the first time Hungary and Poland have played a full match outside of Europe.

Earlier games are set to feature a combined Latin American under 17 team against similarly-aged rivals from Africa United, and a team representing the nations of the Incan Empire (Tawantinsuyu) facing Sydney University.

“We think fans will love the event as a way to kick-off a year in which the 2017 Rugby League World Cup and the proposed Emerging Nations World Championship come to Australasia,” Latin American Rugby League president Daniel Godinez said.

“To have communities from Latin America, Asia, Africa and Eastern Europe all converging to celebrate a game that was unknown by them a few decades ago is a real positive for the sport.

“None of these teams is ranked in the top 20 at the moment, but I believe it’s only a matter of time before one breaks through.

“I can remember people doubting Sri Lanka would ever be a force in international cricket not that long ago and they’ve since become world champions in multiple forms of the game.”

In the latest Rugby League international Federation rankings Chile is listed 34th, Hungary is 38th and El Salvador is 39th, with the other nations recognised by the RLIF, but as-yet unranked.

For Godinez, who arrived in Australia as a childhood refugee and spent several months in Villawood Immigration Centre, the ability of rugby league to put nations such as his homeland El Salvador on the map is something special.

“I’m sure a lot of people don’t realise, but El Salvador has not made a FIFA World Cup for 35 years, and the rugby union team has been heavily beaten in recent times,” he said.

“It’s a tough country full of tough people and rugby league has a real opportunity to create attention if we continue to build on recent foundations.

“For each of the teams competing on February 4, we hope this is a positive way for their people to unify and show strength on the world stage in another pursuit.”

Two brand new jerseys featuring the tribal markings of their respective cultures will be displayed by Peru and the Tawantinsuyu team.

“I have Incan heritage via my father’s side and it’s something I’m quite proud of,” Garcia said.

“The team to play Sydney University will have players from all the nations that today reflect the extent of the Incan empire – from Colombia and Ecuador in the north, down to Bolivia, Peru, Chile and Argentina.

“I’ve had the honour of captaining Ecuador before, but this will be a special moment too.”

Tickets to the day will be $15 for adults or $25 for a family (two adults and two children), with proceeds split between the competing nations for future grassroots development.