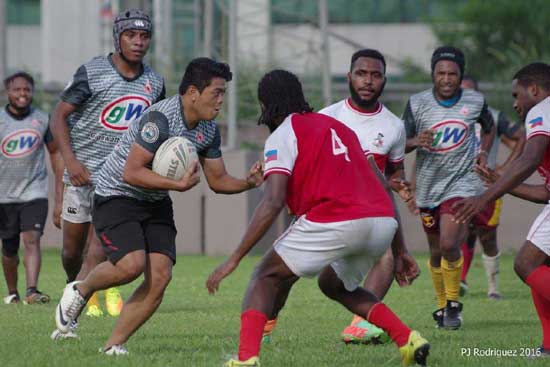 “The Greatest Game of All” returned to Southern Plains Subdivision, Calamba, Laguna. Almost a year to the day that the Manila Storm played their inaugural game against a visiting Hong Kong Residents team!

With the second round of the Erick Paul Estepa Elefante Cup, being played on a dry track. Compared to the maiden game a month earlier under the torrential down pore of Typhoon Karen. The dry weather made for a tough day of Rugby League!

Coach of the Central Luzon Crusaders, Angela Tangam Kual from the Highlands region in the Enga province of PNG, described the games as a competitively tough affair:

“Yesterday’s game was really tough compared to the first game we had in Bicol and from what I observed all teams were really prepared for the match we had. I think in the 3rd match we will have even tougher games”.

With her Captain Gorden Asa, who hails from the Kandep Enga Province in PNG supporting Angela’s comments:

“We played a physical game yesterday, my body is still feeling painful!

But we were fortunate to have our Hooker Jackson Vatu in our team with the experience of playing rugby in the PNG RL, he led us well in all factors of our game. His superb footwork and kicking ability was perfect. His fast dummy half and offloading skills helped us to gain more metres. He scored 3 of our tries and kicked one conversion. ”

For Isaac Kepu from the Southern Highland Province, Ialibu, psp village (KFC. Compound) in PNG and the Captain of the University of Batangas Toro team, it too was a tough day, especially for their debutant Filipino Rugby League players who were playing full contact for the first time:

Our Pinoy players are not like the other club Pinoys who are experienced
Rugby League or Union players, it was their first experience of Rugby and seeing
those Manila Storm PNG boys who were very big was an intimidating experience.

For the record the results for the second round Erick Paul Estepa Elefante Cup are as follows: