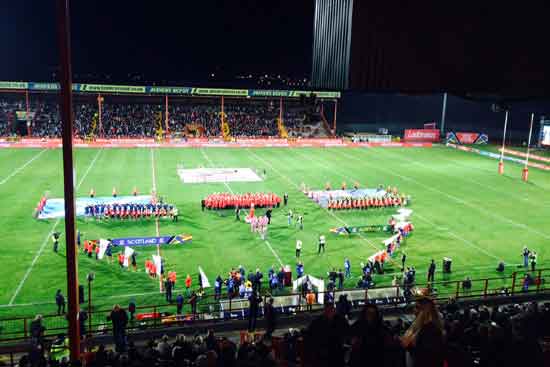 Victory in the Ladbrokes Four Nations tournament has elevated Australia back to number one in the world rugby league rankings released by the RLIF, leapfrogging New Zealand, who they defeated 34-8 in the final at Anfield, Liverpool.

The Kiwis had become the only other nation to head the chart when they took on the mantle after winning the Anzac Test between the nations in mid-2015.
Kangaroos coach Mal Meninga commented:

“It is nice to have the number one position now, we tend to talk about process in the build-up but it is satisfying; the pressure’s on us now to stay there and we are very confident we can handle it.

“We look in good shape for the World Cup next year.”

The biggest leap in the rankings is by Scotland, who became the first nation to take a point off a top-three ranked nation since Papua New Guinea in 1990, when the Bravehearts held New Zealand to an 18-all draw in Workington as part of the Four Nations.
The Scottish performances in the competition see them move from ninth to fourth in the rankings, the highest they have been.

“It is testament to the hard work that so many players, staff and volunteers have put into the establishment and development of our national team over many years, especially long-serving head coach Steve McCormack and skipper Danny Brough who provided so many fantastic memories during the Four Nations.

“This is a real boost for the sport in Scotland and everyone involved will be working hard to
make the most of the increased exposure this landmark brings.”

For the first time USA and Canada, who have been jointly awarded the 2025 World Cup appear in the top 12 nations.

The RLIF World Rankings are based upon the following criteria: