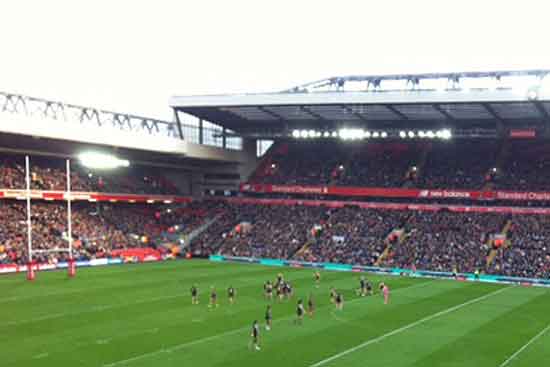 Australia has reclaimed the Four Nations trophy with a 34-8 masterclass against a poor New Zealand at Anfield.

The Kangaroos completely blitzed the Kiwis in the first half, racing away to a 24-0 lead. At that point there would only be one winner in Liverpool.

Australia made one change as anticipated, Shannon Boyd on to the bench for the injured Sam Thaiday. New Zealand brought in David Fusitu’a for Jason Nightengale, moved Tohu Harris into to replace the unavailable Thomas Leuluai and Man Ma’uu off the bench into Harris’ spot. Jason Tapine then joined the Kiwi interchange.

It was a great start for the Kangaroos – taking just three minutes to score their first try.

New Zealand lost the ball near their try-line and the Aussies made them pay, Darius Boyd finding Blake Ferguson in the corner with a cut-out pass to cross.

Johnathan Thurston added the extras to make it 6-0.

The Kiwis responded in the right fashion, earning back-to-back penalties and building some pressure on the Aussie line.

But they couldn’t find a way through and soon the green and gold were in again. After Jordan Rapana opened the Kangaroos up, a stray pass saw Valentine Holmes streak away and then soon after Boyd put Josh Dugan over on the right edge.

Thurston missed his conversion but three minutes later Australia had a penalty right in front and they made it 12-0 after just 18 minutes.

New Zealand were in trouble and then it got worse after an Isaac Luke error. Cameron Smith found Trent Merrin with a short ball and he barged over.

The Kiwis were down 18-0 with still 58 minutes left to play. The Kangaroos were punishing every New Zealand mistake.

When Marty Taupau hit Tyson Frizell high, Thurston added another two points. Still New Zealand couldn’t stem the bleeding. Dugan was next to get his second of the afternoon, touching down a Thurston grubber.

The Kiwi defence failed to deal with it with plenty of time, which was criminal. Thurston’s conversion hit the post and sailed wide.

Just before half-time Greg Inglis was held up in the New Zealand in-goal, but it mattered little. Australia were completely in control at the break with a 24-0 lead.

You’d think it couldn’t get worse in the second half for the men from the Shakey Isles – but it did. Darius Boyd sliced through the defence to get the ball down with the faintest of touches in the 45th minute.

Then Valentie Holmes was bundled into touch in the 53rd minute, New Zealand just preventing another Aussie try. The Kiwis could barely muster a shot in reply,

but then finally they had some relief.

Kevin Proctor broke a tackle and his timely offload found Jordan Kahu to score in the 57th minute.

Kahu couldn’t convert so it was still 28-4, but at least they were on the scoreboard. Tempers starting to flare up with several players pushing and shoving.

But it was the least New Zealand could do to stop Australia scoring again and to put them off their game. Kahu finished off his night with a second try but was again wayward with the boot.

And the Aussies weren’t done yet – Boyd Cordner smashing through in the 74th minute to close proceedings.

The Kangaroos have won back the Four Nations and the number one world ranking. The rest of the rugby league world has been warned.