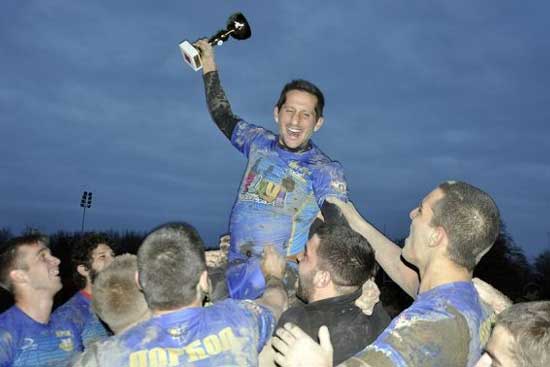 Underdogs Dorćol retained their Serbian Rugby League crown with a 26-10 win over favourites Red Star in the Grand Final, held at a cold and windy Ada Ciganlija.

Astonishingly, it is their fourteenth triumph in 15 seasons since the re-establishment of the sport in the country.

Led by talismanic captain Dalibor Vukanović, who scored 14 points, Dorćol led 14-0 at the break and had the game wrapped up by the hour mark when they were 26-6 ahead.

“This is one of the biggest wins in the history of the club,” said Vukanović, who scored two tries and kicked three goals. “Red Star was a favourite and rightly so because they had previously taken the Super Cup and Serbian Cup from us but our guys played their hearts out, we saved our season by holding on to the championship. Our defence was superb”

Scrum-half Vukanović began the scoring in the fifth minute with a self-converted try, adding two penalties; Relja Petrović crossing on the half hour to extend the lead.

Petr Milanović got Red Star on the board at the start of the second half but Vukanović grabbed his second and two tries in as many minutes from international centre Stefan Stevanović and veteran Milos Milanko eased Dorćol to victory.

League leaders Red Star finished strongly with a further touchdown to Milos Ćalić but their opportunity of a season clean-sweep was gone.