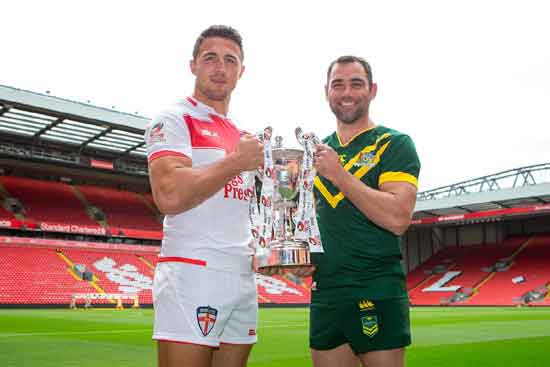 Wayne Bennett has included experienced forward James Graham in his 19-man squad to face Australia in the final group game of the Ladbrokes Four Nations at the London Stadium on Sunday, November 13 (2.00pm).

Graham, who missed the victory over Scotland due to a minor knee injury, is one of three changes to last week’s squad. Kevin Brown and Gareth Widdop also make a return.

Brown last featured for England against France in the 40-6 win in Avignon, a game in which he scored a try and provided the kick through to set Widdop up to touch down over the line. Widdop played in the first game of the Four Nations against New Zealand scoring eight points from the boot.

St Helens centre Mark Percival retains his place in the squad as does Wigan half-back George Williams who was voted man of the match against Scotland for his performance and assisting with three tries on the night.

In only the second-ever game of Rugby League to take place at the London Stadium, England will meet Australia for the first time on home soil since the opening game of the 2013 World Cup in Cardiff.

“I know how much ability this team has got and I want them to play to that ability on Sunday – that’s the best chance we’ve got,” said Bennett.

“I just want the boys to get back to the way we played against New Zealand in the first game of the tournament. There’s been a lot of improvements this week – the attitude is there and everyone’s working hard.

“Australia are the best team in the competition right now and it’s a challenge we’re all looking forward to in front of what will be a vocal crowd at London Stadium on Sunday afternoon.”

On James Graham’s return to the squad, Bennett commented: “He’s back in training with the squad and he’s ready to go. It’s important to have someone like James back in the team. He brings a lot. He’ll be good for us.”

England v Australia is being broadcast live on BBC One from 1.45pm this Sunday. You can also listen to full match commentary on BBC 5 Live from 2.00pm.

Tickets for the 2016 Ladbrokes Four Nations featuring England, Australia, New Zealand and Scotland are still available. More than 50 per cent of tickets are priced at £25 or less. Buy tickets at rugby-league.com/tickets or call the Rugby League Ticket Hotline on 0844 856 1113 (calls to this number will cost 7p per minute plus your phone company’s access charge.)