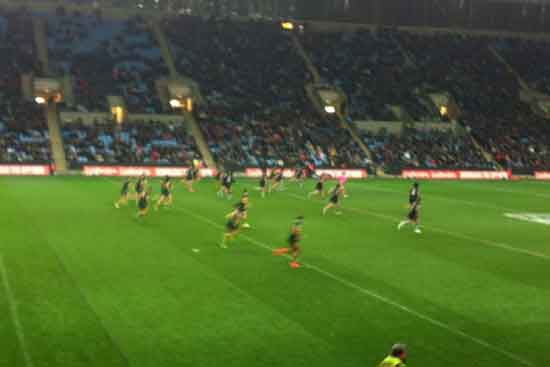 Australia have one foot in the Four Nations final after seeing off New Zealand 14-8 in Coventry.

The Kangaroos remain unbeaten after adding the scalp of New Zealand to that of Scotland last week. They now face England in London and will be confident heading to that match after another impressive display.

Blake Ferguson and Jonathan Thurston grabbed tries in the first half before Solomone Kata and Jordan Rapana got the Kiwis’ four-pointers. Thurston added two penalty goals to finish off the match.

New Zealand started the game with speed and power, moving the ball wide early at every opportunity.

It was a mistake-free opening from both sides with no penalties and rare mistakes.

But the Kangaroos started to build some pressure and off a repeat set found a way through,

Blake Ferguson touched down in the ninth minute after an excellent cut-out pass from Michael Morgan. Ferguson stepped inside to make it 4-0.

It was a clinical start from the Aussies and they soon made it 8-0. Morgan dropped it off to Ferguson and he found Jonathan Thurston is support to score.

Thurston added the extras and the Kangaroos were in front 10-0 after just 14 minutes.

Jordan Rapana almost replied for the Kiwis, after taking an intercept, but a timely ankle-tap from Greg Inglis thwarted him.

It was efficient from the green and gold, but despite dominating most of possession, they couldn’t add a third try in the first half.

New Zealand were busy in defence and stopped Justin O’Neill burrowing over in the 31st minute.

Attacking opportunities were limited for the Kiwis, but they were still in the match at the interval with only 10 points in it.

And they perserverance paid off in the second half when Solomone Kata pounced. In the 48th minute the centre ran from dummy half and had too much power from short range.

Shaun Johnson couldn’t convert but New Zealand was on the board at 10-4. With the pace of the match slowing Australia added two more points through a penalty goal.

Ferguson looked to have crossed for his second try of the night, in the 61st minute, but it was chalked off for a forward pass.

The Kangaroos added another penalty goal in the final 10 minutes.

Johnson came to life just before full-time with a brilliant chip and chase. The halfback regathered, found Shaun Kenny-Dowall who put Rapana over for a great try.

But it was too little too late. Johnson missed the conversion and was held up over the try-line right on full-time, as the Aussies held on for the win.