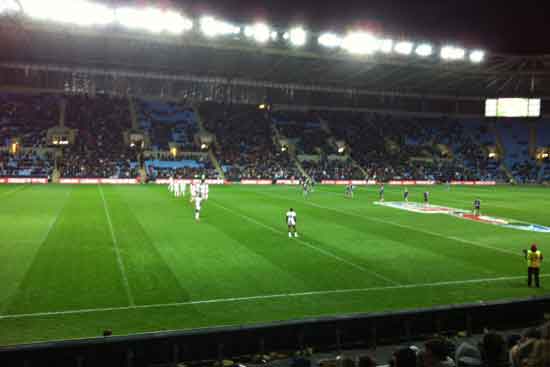 England have defeated Scotland 38-12 but were made hard to work for their win after a poor opening in Coventry.

England headed into the game needing to win by a big margin to keep their Four Nations campaign alive, after their one-point loss to New Zealand.

But if that was the script then Scotland didn’t read it – as Steve McCormack’s men scraped and battled bravely for the full 80 minutes, stunning England early at the Ricoh Arena.

Scotland started the game brilliantly, a stark contrast to their Four Nations opener against Australia in Hull.

They broke the deadlock in the sixth minute through Kane Linnett, after a strong run from the Cowboys centre. Danny Brough couldn’t convert out wide but it was all the Bravehearts in the opening stages.

They then extended their lead in the 23rd minute thanks to amazing effort from Matty Russell. The Warrington winger shrugged off Jermaine McGillvary’s tackle in the corner and then someone managed to get the ball down with no space to work with.

England were shell-shocked but Russell’s try did finally stir them from their lethargy. They scored less than two minutes later, Elliot Whitehead crossing right of the uprights.

Luke Gale converted and it was a two-point ball game. Scotland had cut down their handling errors from the week before, but still managed to give away too many cheap penalties.

This proved costly as just before half-time Whitehead grabbed his second try. A Gale grubber bounced straight into his arms for the easiest of four-pointers.

The halfback’s conversion meant England took a 12-8 lead into the break.

In the second half the influential George Williams was allowed to dance across the line and he set up Mark Percival for a try.

Gale’s kick was wide so the score remained at 16-8. The English machine was running much smoother in the second half as they dominated the ruck area.

In the 54th minute Williams again turned provider. His deft grubber was claimed by Ryan Hall for England’s fourth try of the night and Gale added the extras.

England needed to rack up a big score for the points difference and they pressured for another try. Brough picked a yellow card for trying to slow down the play and England took advantage quickly, Jermaine McGillvary diving over in the corner after a Jonny Lomax cut-out pass.

Gale’s kick was wide from the sideline so it stayed at 26-8. England were pushing for at least a 30 to 40-point win over Scotland and Gale was the next to touch down.

Sam Burgess ripped through the middle and Gale was there in support to score.

In the 65th minute Danny Addy got near the England try-line but lost the ball just a metre or two out. It had been all England for 40 minutes but the Bravehearts hit back through Dale Ferguson.

Brough was having an off night with the boot, missing all three conversions, for a 32-12 score.

As the game petered out Liam Farrell got England’s final try of the night, as the home finished 38-12 winners.