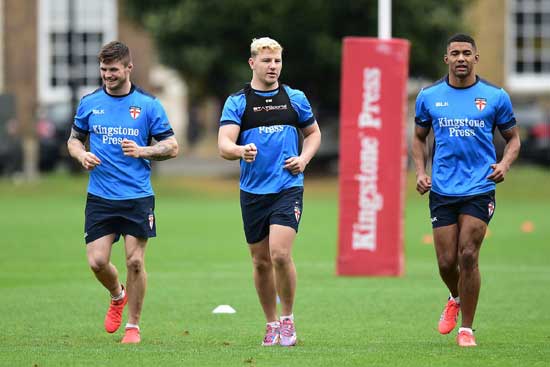 England have made two changes to the 19-man squad that will face Scotland in their second game of the Ladbrokes Four Nations at Ricoh Arena, Coventry on Saturday, November 5 (5.30pm).

This will be the first time these two nations have met in a senior Test as international Rugby League makes its debut at the Ricoh Arena since it opened back in 2005.

Bennett has recalled Mark Percival and Scott Taylor into the squad. Percival, the St Helens centre, and Hull FC forward Taylor both featured in England’s 40-6 victory over France in Avignon two weeks ago.

Wigan Warriors half-back George Williams has also been included and will be making his first international appearance of 2016 after he last represented his country in the second Test of the 2015 International Series against New Zealand at Olympic Stadium.

Bennett confirmed James Graham will be rested while he recovers from a minor knee injury and expects to see him back in contention to play against Australia next week.

“We’re not going to make too many changes but we also want to make sure most players in the squad get game time,” said Bennett.

“The New Zealand game has gone now. We’ve reviewed it, talked about it and now back out on the field to get things right for Scotland on Saturday.

“We won’t be reading too much into Scotland’s game against Australia, they’re a good side with plenty of talent from Super League and the NRL in there. From what I saw, I thought they had a go last Friday and scored some decent tries.

“Just like every game we go into, we’re focused on our job and what needs to happen to come out on top.

“The boys are excited to play in Coventry at the Ricoh Arena and grow the game in the UK. I’ve heard it’s a fantastic facility and we’re looking forward to seeing all of the fans again.”

On the inclusion of George Williams in the squad, Bennett added: “I saw George play in the Super League Grand Final a few weeks ago and he’s a quality player. He’ll definitely be playing this weekend.

“He’s been working hard in training with the players and showing the coaching staff what he can do and what he’s capable of.”

The double-header in Coventry – England v Scotland (5.30pm) and Australia v New Zealand (8.00pm) – is being broadcast live on BBC Two from 5.00pm this Saturday. You can also listen to full match commentary on BBC 5 Live Extra from 5.00pm.

Tickets for the 2016 Ladbrokes Four Nations featuring England, Australia, New Zealand and Scotland are still available. More than 50 per cent of tickets are priced at £25 or less. Buy tickets at rugby-league.com/tickets or call the Rugby League Ticket Hotline on 0844 856 1113 (calls to this number will cost 7p per minute plus your phone company’s access charge.)