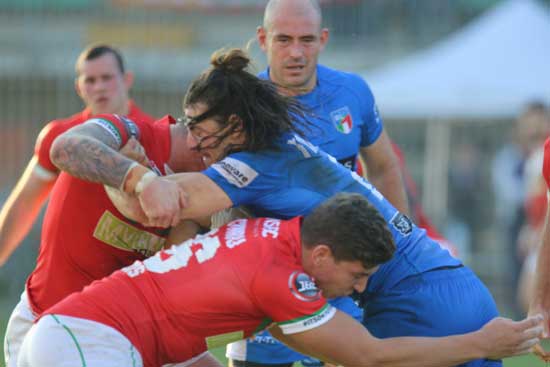 Favourites Italy make two changes for the match that will determine the 14th and final qualifier for the 2017 World Cup, against Russia at the Leigh Sports Village tomorrow night (Friday – kick off 8pm)

The Azzurri have already arrived in preparation for the game and bring in Ryan Tramonte, who was part of their 2013 World Cup squad, and utility Joseph Tramontana, who could debut.

Italy head coach Cameron Ciraldo said: “The boys have trained very well since a disappointing loss to Wales last week. The new players in the squad are in for tactical reasons and deserve their chance, they have forced their way into the squad through the way they have trained.”

Russia, who lost in Ireland last weekend having beaten Spain, name an unchanged 19 although they have fitness doubts over giant CSKA centre Kiril Kosharin and experienced utility Petr Botnarash.

Head coach Denis Korolev noted: “We are really glad that we have earned a chance to fight for the last berth at the 2017 World Cup. The Italian team boasts a very good selection of players so we know this is not going to be an easy match for us.

“We’re struggling with some injuries to key players and even though we’re not hopeful of getting them on the pitch, our aim is still victory and we’ll do our best to achieve it.”

This will be the sixth meeting between the nations, with Italy holding a 3-2 lead, the first encounter was as part of the 2013 World Cup qualifiers which Italy won 92-6 at the Stadio Plebiscito in Padova.

Eight of the Russian squad who played in that game are in the squad for Leigh.

The match will be livestreamed at: http://www.ustream.tv/channel/rQeYYztLYZq