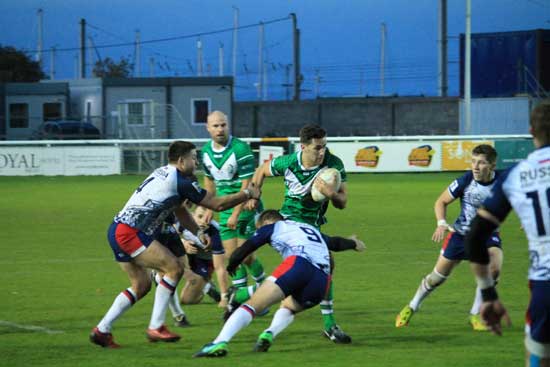 The Wolfhounds turned on the style at the Carlisle Grounds in Bray and the Russians had no answer to their high-tempo display of power and accuracy.

The victory means Ireland have qualified for next year’s tournament in Australia, New Zealand and Papua New Guinea, while the Russians face an elimination play-off against Italy next week.

Russia got off to a great start and scored the first try but they couldn’t keep up with the Irish who ran in tries from all angles, including doubles from Galway Tribesman winger Alan McMahon, outhalf Scott Grix and back row Ollie Roberts.

The Irish won the tackle battle and ruthlessly punched holes in their opponent’s defence. The Russians were game and had spells when they gamely challenged Ireland — but the Wolfhounds’ were always firmly in control and as the Russians tired, Ireland’s ran up the score, with no try more popular than that scored by James Kelly after he came on as a replacement in the second half.

The Shankill native, who plays for the Dublin City Exiles, and Alan McMahon must surely be in the sights of the professional clubs in England after their recent displays for Ireland.

There was also a touching moment late in the second-half for long-serving stalwart Stuart Littler, who scored a memorable try in his final match before finally hanging up his boots after a long and successful career.