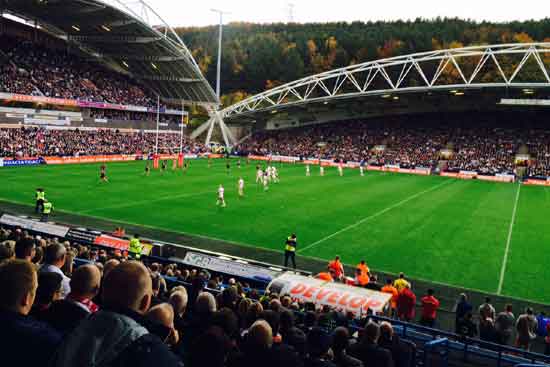 A Shaun Johnson field goal has sealed a close 17-16 victory for New Zealand over England in Huddersfield.

Jordan Rapana scored two tries, the second a brilliant effort, to kick start the Kiwis’ defence of the their Four Nations title.

The defeat leaves England with a mountain to climb to make the final an Anfield next month.

England took a 2-0 lead just two minutes after kick-off thanks to a Gareth Widdop penalty.

They added another two points in the 11th minute to edge further in front.

Twelve minutes later John Bateman was held up as England pushed for a try.

James Graham forced his way over the line and got the ball down, but the score was chalked off by the video referee for a double movement.

England were dominating territory but the Kiwi defence was resolute.

New Zealand took some time to get into gear and in the 29th minute Jordan Kahu slotted a penalty.

The Kiwis started to enjoy more possession and then Jordan Rapana struck on the right wing.

New Zealand to a 6-4 lead into the break. The Kiwis started stronger in the second half, grabbing their second try immediately through Shaun Johnson.

The halfback intercepted a Widdop pass and bolted downfield for an easy four-pointer.

But England responded quickly, McGillvary barging through out wide. An Elliot Whitehead cut-out pass put him in space and the Huddersfield flyer took his opportunity.

Widdop’s conversion was perfect and New Zealand’s lead was cut to 12-10.

But Rapana injected himself with a classy try to strengthen New Zealand’s hold on the contest. Kahu couldn’t convert, hitting the post with a costly miss, and the buffer was six points.

However, England weren’t done yet and they tied the match up at 16-16 after a great Ryan Hall try. Widdop smartly tapped the ball on and Hall touched down out wide.

The St George Illawarra playmaker nailed the conversion and the game was in the balance once more.

New Zealand poked their noses in front once more when Shaun Johnson kicked a drop-goal in the 64th minute.

Widdop missed a drop-goal attempt with three minutes left on the clock.

England pushed for a score in response but the Kiwis held them out to claim the win.